Opposition grows to US ban on nationals from predominantly Muslim countries 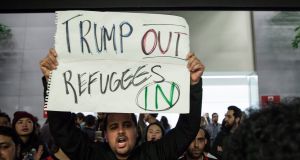 A protest at the arrivals hall of San Francisco’s SFO International Airport after people arriving from Muslim-majority countries were held at the border control as a result of the new executive order. Photograph: Peter Dasilva/EPA

US Democrats have vowed to overturn president Donald Trump’s executive orders on immigration with legislation, as opposition and protests grew over his ban on nationals from seven predominantly Muslim countries.

Responding to the groundswell of anger at Trump’s far-reaching order, Charles Schumer, the Democratic leader in the US Senate, said his party could block the new president’s order if more Republicans joined the party’s senators Ben Sasse and John McCain in opposition to the ban and backed Democratic legislation.

Political and public resistance to Mr Trump’s new rules intensified as protests grew on Sunday and rallies took place in Boston, New York, Washington and other cities along the US east coast, adding to the demonstrations at major airports, from New York to Chicago to San Francisco and Los Angeles.

“Can you hear us Washington?!” tweeted Boston mayor Marty Walsh, the son of Irish immigrants, as thousands gathered to protest in Copley Square in the centre of the city. “We’re standing strong in Boston to support and protect ALL of our people and we will not back down. #NoBanNoWall.”.

The highest-ranking law enforcement officials from 16 US states, including California, New York and Pennsylvania, added their voices to the chorus of condemnation at Mr Trump’s order.

“We are committed to working to ensure that as few people as possible suffer from the chaotic situation that it has created,” a joint statement by attorneys general in the states said.

An at-times emotional Schumer, addressing reporters at a news conference on Sunday, called the new president’s ban “mean-spirited and un-American” and called to it to be “reversed immediately”.

“Senate Democrats are going to introduce legislation to overturn this and move it as quickly as we can,” he said, referring to a bill that the Democrats are already drafting.

Fulfilling one of the most contentious promises of his 2016 election campaign, Mr Trump suspended the entire US refugee programme for 120 days, indefinitely halted the admission of refugees from Syria and banned nationals from Iran, Iraq, Libya, Somalia, Sudan, Syria and Yemen for 90 days.

The full force of Trump’s order, signed late on Friday, was witnessed at major US airports on Saturday as immigrants with green cards and other immigrant permits allowing them to live in the US were detained.

Families were separated and returning legal residents were blocked from returning to work and study as federal authorities struggled through the confusion around the implementation of Mr Trump’s measures.

Lawyers travelled to airports to represent detainees and the American Civil Liberties Union brought a legal action on behalf of two Iraqi men held at JFK airport in New York.

Federal Judge Ann Donnelly of the US District Court in Brooklyn, a Barack Obama nominee, ruled in their case late on Saturday that repatriating travellers could cause them “irreparable harm”.

Her emergency stay against the detention of legal residents – met by cheers outside a packed courtroom and at the airport protests – was followed by similar rulings in courts in Massachusetts, Virginia and Washington as Mr Trump was accused of unconstitutional and legal overreach by plaintiff lawyers.

On Sunday immigration attorneys were still trying to secure from the Department of Homeland Security lists of people being held under Mr Trump’s order.

The department in charge of federal immigration remained unfazed by the court rulings, saying that the would have little impact on the “overall implementation” of the Trump administration’s order.

It said that “less than 1 per cent of the more than 325,000 international air travels who every day were inconvenienced”.

Mr McCain said that the ban would give Islamic State militants “some more propaganda”, while fellow Republican Mitch McConnell, the party’s Senate leader and a close Trump ally, said that it was important to remember that “some of our best sources in the war against radical Islamic terrorism are Muslims”.

Billy Lawless, the Chicago-based Irish senator representing the Irish abroad, joined protesters at O’Hare Airport on Saturday night to express his concerns. He described the Trump ban as “unAmerican”.

“It is not the America that I came out to,” said Lawless who emigrated from Galway and now works as immigrant advocate for Irish and other nationalities in Chicago. “It is very, very worrying. How far is he going to go? It has put a lot of fear into people. It is the intent of it.”

Samantha Power, Barack Obama’s ambassador to the United Nations, referred to her background as an Irish immigrant to express the horror of fellow diplomats at Mr Trump’s actions.

“I immigrated to US as 9yo & became UN ambass; other diplomats marveled at familiar American story. Now they’re horrified by unAmerican madness,” she tweeted on Saturday.