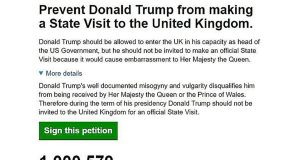 Screen grabbed image taken from the UK Government and Parliament site of a petition calling for US President Donald Trump’s state visit to the UK to be called off which has been backed by over one million people. Photograph: Parliament UK/PA Wire

An online petition calling for Donald Trump to be prevented from making an official state visit to the UK has reached 1m signatures.

The petition on the government’s official petitions site, which at one point was being signed by more than a thousand people each minute, quickly reached the 100,000 signatures needed to be considered for a debate in parliament.

However, Downing Street confirmed that Theresa May would not be withdrawing her invitation to the US president because it remained “substantially in the national interest”.

The petition, which falls short of calling for Trump to be banned from the UK, argues that he should not receive a full state visit including audiences with the royal family “because it would cause embarrassment to Her Majesty the Queen”.

The petition’s creators said: “Donald Trump’s well-documented misogyny and vulgarity disqualifies him from being received by Her Majesty the Queen or the Prince of Wales.

“Therefore during the term of his presidency Donald Trump should not be invited to the United Kingdom for an official state visit.”

As global condemnation of the controversial ban spread, British Conservative politicians joined the Labour party and Liberal Democrats in questioning May’s decision to go ahead with a state visit during which Trump would be courted by the UK government and royalty.

Jeremy Corbyn, the Labour leader, called for the visit to be suspended while Trump’s immigration ban is in place.

He also questioned why May was so quick to invite the president given his highly controversial policies.

“Donald Trump should not be welcomed to Britain while he abuses our shared values with his shameful Muslim ban and attacks on refugees’ and women’s rights.

“Theresa May would be failing the British people if she does not postpone the state visit and condemn Trump’s actions in the clearest terms. That’s what Britain expects and deserves.”

Tim Farron, the Liberal Democrat leader, in an interview on Sky News’s Sophie Ridge on Sunday, said the invite should be withdrawn and should never have been made in the first place.

“What I am opposed to is Theresa May, when she should have gone over to the States to defend our corner and stand up to Donald Trump, has gone over and held his hand and is being seen now as giving him a royal audience in the United Kingdom,” he said.

“She should be standing up for British people and British interests, not going over there and tickling his tummy.”

Ruth Davidson, the leader of the Conservative party in Scotland, released a statement saying that state visits were designed “to celebrate and entrench the friendships and shared values” between their respective countries.

Trump, she said, should not be welcomed to Britain “while a cruel and divisive policy which discriminates against citizens of the host nation is in place”.

Writing in the Guardian, Tory MP Sarah Wollaston said that while the state visit would be likely to go ahead, how it was done would provide an important “symbol”.

She argued that Westminster Hall ought to be reserved for leaders who had made a lasting and positive difference to the world.

“That does not include Mr Trump. No doubt there will be those who wish to fawn over him but that must not be from the steps of our nation’s greatest hall,” she said.

A fool, a buffoon and a wazzock

Parliament has already debated Trump once following a public petition about whether to ban the Republican presidential frontrunner from entering the UK after he originally floated the idea of banning Muslims from America.

MPs described him as a “fool”, a “buffoon” and a “wazzock” in the lengthy parliamentary debate in January last year.

Last year’s petition calling for a second EU referendum following the vote for Brexit, was the largest parliamentary petition on record. It was signed by over four million people.

In addition to the anti-Trump petition, campaigners from groups including Stand Up to Racism are planning to organise “the biggest demonstration ever” to coincide with the US president’s visit.

On a Facebook event page, organisers said: “The invitation to Donald Trump for a state visit will be opposed by millions in Britain. Our government should not be seen to be endorsing the sorts of ideas and policies he is putting forward.

“We are committed, along with other campaigning organisations including Stop the War, People’s Assembly against Austerity and CND , to oppose this visit and to organise mass protests if it takes place.”

Downing Street was asked for a response to the calls to cancel his state visit. A spokesman said: “We extended the invite and it was accepted.”