Trump is pro-nationalism but ‘not against Europe’, claims aide 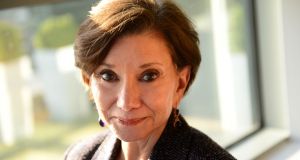 Advisor to the Trump transition team Dr Jan Halper-Hayes: ‘Only 4 per cent of Washington DC voted for Trump . . . this is a hostile takeover.’ Photograph: Dara Mac Dónaill

Donald Trump and his allies are currently engaged in a “hostile takeover” of the United States government, according to a member of the Trump transition team speaking on a visit to Dublin.

In an interview with The Irish Times, Dr Halper-Hayes says “Trump is not against Europe... but he very much supports the countries where the voters are speaking out that they’re interested more in nationalism”.

Of the significance of the US presidential election outcome, she says “Only 4 per cent of Washington DC voted for Trump . . . this is a hostile takeover”.

A psychologist and former management consultant, Dr Halper-Hayes worked in mergers and acquisitions for many years, “so hostile takeover is definitely my speciality”.

She is reluctant to detail exactly her role on the transition team but is involved advising on changes of personnel, political outlook and culture. She is focussed on the 4,000 political appointments to leadership roles in the US civil service and government agencies that are in the gift of the new administration.

Changes will result in “bringing more business practicality to government”, she says. “We’re asking the civil servants and the senior executive service to drain their own swamp.”

Doesn’t this sound ominous for them? “Definitely when it comes to climate change those guys are worried they’re going to lose their jobs,” she replies.

Dr Halper-Hayes was in Dublin to speak to an audience of clients and guests of Goodbody Stockbrokers about the international economic impact of the Trump presidency.

The early days of the that presidency suggest that he will govern very much in accordance with his campaign promises. “Oh yeah, oh yeah,” she responds enthusiastically.

However, she says the “liberal media” has wrongly portrayed this as a threat to international trade.

“America first. He did not say’ I’m a protectionist’.”

Actually, what he said was: “We must protect our borders from the ravages of other countries making our products, stealing our companies, and destroying our jobs. Protection will lead to great prosperity and strength.”

When this is put to her, she replies: “Um, we’re going to have to look at the full context of that, despite my being there I was quite excited, so you know... What I know is that he believes in bilateral agreement.

“Trump doesn’t want to be involved in multi-lateral negotiations or trade agreements. . . He is more of a nationalist than a globalist.”

Is she alarmed by the aggressive nationalism of the campaign?

No, she replies, describing Mr Trump as part of a global political insurgency against the established political order. She said a senior Facebook executive has told her that “60 per cent” of the posts about politics on Facebook were “insurgent anti-establishment messages”.

While she refers to Mr Farage’s influence on Mr Trump, some of her own statements have echoes of the former UKIP leader.

“I never thought the European Union could work,” she says.

“France — you have to pasteurise your cheese now, you can’t make it the way you used to make it.”

When it is pointed out the latter is demonstrably untrue she replies: “It wasn’t a good example... but why should the laws of the European Union supersede laws of the United Kingdom?”

Dr Halper-Hayes, ordinarily a resident of the UK, gave an interview to the BBC last summer when she expressed worry that Mr Trump was “psychologically unbalanced”. He previously assessed him as having the “perfect” temperament for the presidency, comparing him — temperamentally — to presidents Roosevelt, Kennedy, Johnson and Reagan.

She is defensive about the BBC interview, but says that the comments were made during the period after Mr Trump won the nomination and was being widely criticised for his statements and behaviour.

“In all honesty I had been out late the night before and so my guard was down at seven-odd something in the morning,” she says. “But I also thought I’m hearing too much from too many people about how uncomfortable they are about his behaviour and this needs to come to light . . .

“The whole context was: Look, I’m a Republican, I really hate saying this but there is an element of him right now that is psychologically unbalanced.”

Her explanation is that he was surrounded by “sycophants” who wanted to “ride the coattails” and not “tell the truth”.

His then advisers — changed soon after — had tried to get him to “pivot” and present a more mainstream Republican candidacy. “Any one of us could be subjected to a period of being psychologically unbalanced,” she adds.

“ I kept watching his behaviour and found he had been making the changes in a positive way, and we will always, always have things to criticise him about.

“For 14 years he was in reality TV. Do we know if he is ever going to act presidential? You know, I don’t want to be disappointed, so that expectation is not on the table for me. I don’t expect him to be that way. This is who he is.”