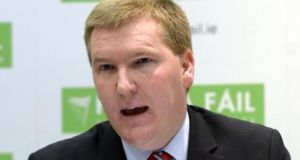 Minister for Public Expenditure and Reform Michael McGrath has said the €9.1 billion allocation for capital expenditure next year is not “set in stone” for the Budget.

He signalled that the funding level for major capital projects may increase. “We are actually going to maintain and have the ambition to increase capital investment.”

He added that the reality is “we will probably get a lot more done with the same amount of money than had been planned” because of changes already underway in the construction industry with more likely.

“There’s already evidence for better value for money coming back in tendering projects.”

The Fianna Fáil Minister said that on a “no policy change basis we’re saying it’s €9.1 billion, that does not mean that that is set in stone with regard to the Budget”.

During question time in the Dáil late on Tuesday night, Ms Farrell expressed concern that the allocation was always going to be around the €9.1 billion mark. “This was part of the plan before the onset of Covid and this is the plan after. So it’s my understanding, then that there is no additionality and we’re exactly left, right where we started.”

The Galway West TD said capital expenditure had a large and positive multiplier effect on employment as a means of tackling crises.

But she said that “we are currently the worst performing economy in the EU” according to Eurostat figures in terms of investment as measured by gross fixed capital formation.

And she was concerned that if the Covid-19 crisis lasted for two or three years then the €9 billion allocation “is a real cut per capita” when factoring inflation and population growth.

“This is austerity by stealth under the table, through the backdoor, call it what you want, but we’ve seen it before.”

Mr McGrath said Ms Farrell should not underestimate the significance of the State’s commitment to investing more than €9 billion at a time when they were forecasting a deficit in the region of €25 billion to €30 billion.

He pointed out that 10 years ago during the recession capital expenditure was slashed by about 60 per cent.

“So this is in marked contrast to what happened in the past. We are actually going to maintain and have the ambition to increase capital investment.”

He said that in the July stimulus package €500 million was added and “there’s about €900 million extra in the Department of Business vote, much of it to do with the enterprise grants to restart grants”.

He added: “But I think you should reserve final judgment, until you see the actual allocation on Budget day.”