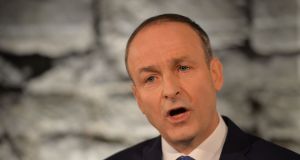 Taosieach Micheál Martin said he was not at all happy that former ministers ‘would be taking up positions’ in the area they had responsibility for ‘immediately after or within months of having left office’. Photograph: Alan Betson/The Irish Times.

Minister for Public Expenditure and Reform Michael McGrath is to review the legislation covering the remit of the Standards in Public Office (Sipo) Commission, Taoiseach Michael Martin has said.

Mr Martin said the Cabinet had agreed there should be a review of the legislation for the State’s ethics watchdog amid controversy over former minister of state Michael D’Arcy resigning from the Seanad to take up a private sector role.

The Taosieach said he was not at all happy that former ministers “would be taking up positions” in the area they had responsibility for “immediately after or within months of having left office”.

He said “there should be an effective cooling off period” and that the law should allow for prosecution and sanction of any former minister who did not adhere to the rules.

Mr Martin was speaking in the wake of the growing controversy over the resignation of Mr D’Arcy to become the chief executive of the Irish Association of Investment Managers (IAIM).

The Taoiseach also said “the influence of foreign funding in elections and other areas in this State” was a matter of concern.

He said funding from other countries, particularly the US, was an issue and “a larger area for the fundamentals of democracy” than former ministers going to the private sector in their area of responsibility.

He told Sinn Féin leader Mary Lou McDonald that she should be looking at the issue of foreign funding, in apparent reference to her party’s fundraising efforts in the US. He added that “referenda have been influenced” by large amounts of money coming from abroad.

Ms McDonald highlighted the situation this week facing mortgage holders worried about the end of their pandemic payment breaks and compared this to Mr D’Arcy joining the IAIM. The ending of mortgage breaks will cause a great deal of stress for people, she said.

“Nobody expected the mortgage breaks would go on forever but certainly they should be maintained until the pandemic ends,” she said.

She said that “leaving mortgage holders to go it alone” and “on a case by case basis to rely the sympathy of the banks is frankly unacceptable”.

The Dublin Central TD described the meeting between Government Ministers and the banks on Monday to discuss the issue as a “façade” with no real attempt to reach a solution.

She said this came at a time when a “cosy relationship between Government and the financial sector” was highlighted by Mr D’Arcy’s move to a role in a sector he had direct responsibility for until recently. She said there is “no relief for struggling mortgage holders but a big job for a former minister”.

Ms McDonald added that he is the “second former minister at the Department of Finance to go through the revolving door of government to the world of high finance” and that another former minister was on the other side of the table when the Government met the banks to discuss mortgage breaks.

She said that Sipo has had concerns about this revolving door and had repeatedly approached Government for the last five years for the powers to investigate and prosecute ministers who do not adhere to the cooling off period.

“And Sipo has been consistently ignored by Government,” she said.

The Taoiseach insisted that the Ministers meeting the banks was a “genuine engagement” in terms of attempt to ensure that people were treated fairly and seriously and in a sympathetic way.

He highlighted the review of the Sipo legislation and his unhappiness that former ministers move immediately to the private sector in their area of responsibility without an effective pause. But he insisted that supports were still in place for mortgage holders.

He said “I fully understand the anxiety and stress of many individual mortgage holders and SMEs” with the ongoing impact of Covid-19 on their capacity to pay loans. However, he said a majority of people were in a position to return to normal mortgage payments.

The 30th September deadline was for new applications and it was “not the cliff edge as has been presented”.

There are various protections in place for consumers and those protections will continue to ensure there is a sympathetic position adopted, he said.

He said “the next stage is individually tailored approaches to individual loans” including options such as interest only payments.