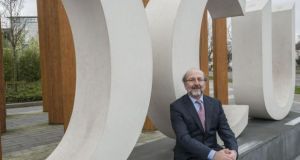 Prof Brian Mac Craith will head up the 11-person commission alongside a former Guardian editor and the founder of Storyful. Photograph: Brenda Fitzsimmons

Prof Brian MacCraith, a former president of Dublin City University, will chair the Future of Media Commission which was established by the Government on Tuesday.

The 11-person commission will also include the former editor-in-chief of the Guardian, Alan Rusbridger, as well as former broadcaster and Storyful founder Mark Little.

The Cabinet agreed the terms of reference as well as the membership of the commission, which will examine the future of broadcast, print and digital journalism at a time when the funding model used by the industry for many decades is no longer sustainable.

The commission has been asked to report within nine months on how a strong, robust, independent media sector can survive into the future.

The new body will include journalists, academics, entrepreneurs and business people with expertise in diverse forms of journalism across a multiple of platforms.

There are two other members whose names have yet to be announced.

The Government has today agreed the terms of reference and membership of the Future of Media Commission, chaired by Professor Brian MacCraith.

“People rely on newspapers, TV, radio and online platforms to find out about local and national issues, to inform them about current affairs, to showcase our culture, to reach out to our diaspora and to bring the nation together at times of national celebration and reflection.”

He said the commission would chart a pathway for public service broadcasting and independent media into the future.

Speaking in the Dáil, the Taoiseach said “we should financially underpin our media and we should do it in a way that ring-fences its editorial independence, both in broadcasting and in print media”.

Mr Martin said there had been a “seismic change” in journalism in terms of non-traditional media.

“We must accept that editorially independent journalism is essential to underpin our democracy in the modern era,” he said. “It is vulnerable to attack from new platforms, as we know from the experiences in other jurisdictions.

“The Irish system is no less vulnerable to such attacks than the system in any other jurisdiction, whether at election time or any other time. That must be kept under review. Above all, journalism should be financially remunerative. Those working in the sector should be able to anticipate and aspire to a particular quality of life, but that is becoming more challenging and difficult.”

He added that “it is extraordinary that those currently working in journalism must marry so many different platforms and be on all of them almost simultaneously from morning to night”.

Mr Martin said journalism should be financially underpinned “through a universal approach. The licence fee, in itself, is not sufficient. The methodology of collecting it is not sufficient. Many people are paying it. Quite a number are not. That is not fair.

“It is also not at present in a position to underpin the quality, breadth and width of public service broadcasting that the State requires to underpin our democracy.”

“Traditional broadcasters and newspapers are facing new and increased pressures. The Government is determined to chart the way forward so that we can continue to have an energetic public service broadcaster that informs, entertains and reflects us as a people, and delivers value for money.”

Prof MacCraith said: “I look forward to working with my fellow commission members on what is a very important public policy challenge and one that is very important for the quality and wellbeing of our shared society.

The commission will look at how other states have adapted to the changed media environment, and how public service journalism can be delivered over the next decade.

In particular it will examine how the sector can be funded in a way that is sustainable, gives greater security of funding, ensures independent editorial oversight and delivers value for money to the public. It will also make specific recommendations about the national broadcaster RTÉ’s role, financing and structure into the future.