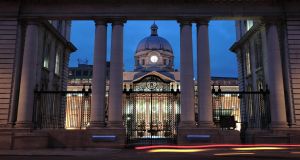 Dublin Chamber also called on Government to accelerate the ‘transition to a green economy’. Photograph: Getty

Dublin Chamber has joined the chorus of lobby groups calling for a reduction in the tax businesses pay when assets are sold at a profit, a change it suggests could boost investment as the Republic moves to reboot its economy.

In its pre-budget submission, the group, which represents businesses throughout the greater Dublin area, called on Government to reduce Capital Gains Tax (CGT) to 20 per cent for businesses not listed on any stock exchange.

“Introducing a targeted CGT reduction like this would send a signal that the Government is serious about growing our SME sector. It would cost less than the 2 per cent VAT cut announced in the July jobs stimulus and would help to stimulate economic activity,” said Dublin Chamber chief executive Mary Rose Burke.

CGT is charged at 33 per cent when an asset is sold or transferred at a profit and the taxed is charged only on the profit. The existing regime does include entrepreneur relief, which levies CGT at just 10 per cent on gains from the disposal of qualifying business assets up to a lifetime limit of €1 million.

“Our proposed 20 per cent CGT rate for SMEs would still be higher than the 10 per cent rate that exists in the UK, but taken together with our other proposals, it would provide a major boost in Irish business investment,” said Ms Burke.

The lobby group also called on Government to accelerate the “transition to a green economy” by bringing forward delivery of major infrastructure projects such as MetroLink, the DART+ scheme, BusConnects and Dart Underground. Additionally, it sought investment in broadband and the delivery of a water supply project to stave off recurring issues.

“We are at a critical juncture, so the new National Economic Plan needs to be ambitious and truly forward looking,” said Ms Burke. “Our vision is that Dublin will become a 15-minute city in which all residents have access to good public transport, services, and facilities within 15 minutes of walking or cycling from their home.”

Among other measures proposed by Dublin Chamber is an extension of the employment wage subsidy scheme, improvement in the national childcare scheme and an introduction of a tax credit for SMEs that are “going green”.