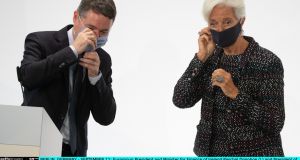 Minister for Finance Paschal Donohoe and president of the European Central Bank Christine Lagarde during a press conference during the informal meeting of European Union ministers for economic and financial affairs in Berlin earlier this month. Photograph: Hayoung Jeon – Pool/Getty Images

The Government is starting final preparations for the Budget and is giving some indications of the parameters under which it will be drawn up. Borrowing will remain high next year, albeit below this year’s level, as the assumptions are that the Covid-19 economic crisis will drag on and that the UK will leave the EU trading regime without a deal on the future relationship.

There is no doubt that running a deficit is the correct thing to do to support the economy, given the extraordinary and ongoing impact of the pandemic. The prospect of new restrictions in Dublin underline that despite some recovery after the national lockdown, a difficult road lies ahead, especially for the consumer-facing sectors of the economy. And the high level of uncertainty also threatens wider damage to confidence.

Minister for Finance Paschal Donohoe and Minister for Public Expenditure Michael McGrath, in a joint statement this week, said they expect that before any budget measures, borrowing next year could be in the region of €15 billion to €19 billion. Added to a deficit this year which could go as high as €30 billion, this indicates a large addition to the national debt. Part of the budget will include a recovery fund to deal with the fall-out from Covid-19 and Brexit. There is still some hope that a deal might be done between the EU and UK which would limit the Brexit damage, though the current state of relations do not give much cause for optimism.

The Government has little choice but to continue the extraordinary level of supports for the economy. The political difficulty is that whatever it does will never be enough – the pandemic has delivered a massive shock to a number of sectors, which has increased unemployment sharply and will leave lasting damage. The return of heavier restrictions in Dublin will intensify the pain on certain sectors.

For 2021, it will be important to focus in particular on the worst-hit areas and on the most heavily-affected groups, particularly younger people. The hope is that the rest of the economy can continue to operate reasonably well and thus create the tax revenues to support the worst hit. So far tax trends have been reasonably encouraging, though a few key months lie ahead.

The ministers are correct to rule out higher income tax bills for 2021 – a key job is to get those who have retained their incomes to spend more money. They can reasonably hope too that the State can continue to borrow at low interest rates. Yet it is clear the State’s finances will have to be brought back into line in later years. If the coalition is to achieve half the things it set out to do in its programme for government, then it will have to find new revenues somewhere in the years ahead. But the priority first is to limit the damage from the pandemic.