Department of Health to get ‘workable, sustainable, comprehensive’ Budget allocation 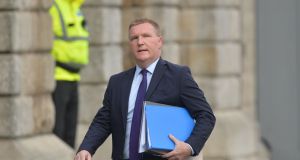 Michael McGrath Minister for Public Expenditure Michael McGrath said there may be a requirement for different parts of the country to move from one risk level to another. Photograph: Alan Betson

The Minister for Public Expenditure and Reform has pledged to introduce

“workable, sustainable and comprehensive” funding for the Department of Health in the Budget next month.

Michael McGrath said that overall the extra expenditure would be between €2 billion and €3 billion above what was originally intended.

“And we have to now establish what will be the requirement to ensure that we have a health service that is fit for purpose to deal with the winter months ahead and indeed to be sustained right through 2021.”

He said they had to assume that coronavirus will be prevalent right through that period.

Mr McGrath was speaking as he opened a Dáil debate on Government expenditure in the Covid-19 crisis.

Referring to the Government’s roadmap to deal with Covid-19 Mr McGrath said “there may be a requirement for different parts of the country to move from one (risk) level to another.

“We have to be adaptable and agile and be in a position to respond and to provide supports as and when and where they are needed during the period ahead.”

The Minister confirmed that Budget 2021 would be framed on the basis that the “UK and EU will be trading on WTO (World Trade Organisation) terms from January 1st 2021”.

Operating of the basis of a no deal Brexit, he said “this all means that spending in the upcoming budget will have to be focused on the policies that helped the economy to recover, to support businesses and to get as many people back to work as possible”.

Dealing with Covid-19 or Brexit in the lead-up to a budget represents a huge challenge but having to deal with the two at the same time “makes the task ahead all the more difficult”.

But he said there would be a capital expenditure investment of over €9 billion which sends out “a really positive signal to the construction sector” as it plans for next year, which will maintain employment

He said that by the end of the year €16 billion in additional Covid-19 spending will have been provided by the Government this year.

That equated to 9 per cent of modified Gross National Income and “is equivalent to over five times the original increase in gross expenditure planned for this year”.

Mr McGrath said the gross voted expenditure at the end of August was €10 billion, which was 24 per cent ahead of the same period in 2019.

Gross voted expenditure for the year is estimated at over €86 billion, an increase of €19 billion or almost 30 per cent relative to the outturn last year, some 23 per cent more than was originally budgeted for.

Sinn Féin finance spokesman Pearse Doherty said the level of spending to combat Covid-19 is not unprecedented because the State poured €44 billion into bailing out the banks during the last economic crisis.

He said this was “worth bearing in mind” when they heard people already talking about the requirement for “fiscal prudence”.

The Donegal TD said that €2.8 billion had been provided by the end of August to support 663,000 employees and 65,000 but he expressed concern at the new scheme starting in September.