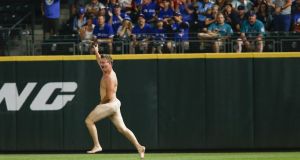 A streaker runs across right field during the ninth inning of the game between the Toronto Blue Jays and Seattle Mariners at Safeco Field on August 4th, 2018 in Seattle, Washington. Photograph: Lindsey Wasson/Getty Images

A man believed to be Irish who was arrested after streaking at a Major League Baseball game in the US is to appear in court on Wednesday where he will be formally charged.

The 28-year-old, who is reported to be resident in Vancouver, Canada, was briefly arrested by Seattle police on Saturday following the incident which took place at a game between the Seattle Mariners and Toronto Blue Jays.

Video footage of the incident posted online shows the unnamed man running around the baseball field before being wrestled to the ground by four officials, to the delighted shouts of the crowd.

Officers at the ground initially charged him with both trespass and indecent exposure.

However, the decision on which charges would ultimately be proceeded with was left to the Seattle City Attorney’s Office.

Estrada threw a gem last night. 1-hitter through 7. Jay's win.. Playing like they're in contention not the M 's. And then there was this guy #BlueJays #MarinersJays #Mariners #STREAKER pic.twitter.com/8PxkDkwSqe

Update: according to my source with the King County Sheriff’s office, last night’s streaker is still incarcerated. Since he is an Irish national, he could now be deported. Charges are very serious. All this because I’m told his buddies bet him $80..

In a statement on Tuesday night, Seattle time, the office said it “has elected to file the misdemeanor charge of ‘Criminal Trespass’… [BUT]declining to file the other referred charge of ‘Indecent Exposure’.”

It said the defendant is not in custody having posted bail on Sunday. “His arraignment is scheduled for Wednesday morning at Seattle Municipal Court.”

The man was identified in online reports as being Irish - Sports Illustrated in particular noted a Shamrock tattoo on his posterior - but neither authorities in the US or Canada could confirm his nationality. That may be clarified during his court appearance on Wednesday.

A Seattle police spokesman said he had been arrested by officers from the nearby Kings County department and released after questioning at the Seattle baseball ground.

Online commentary claimed the man was a resident of Vancouver in Canada - the Blue Jays being a Canadian baseball team - and could face deportation from the country because of the nature of the charges. However, this has not been confirmed as a possibility.

A post from television sports reporter Hazel Mae said: “Since he is an Irish national, he could now be deported. Charges are very serious. All this because I’m told his buddies bet him $80..”.

One law enforcement source in the US said baseball games are “pretty calm events” but episodes of streaking “do happen every once in a while”.