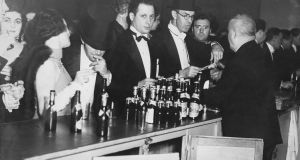 “I can say honestly that in twelve days in America I saw more cases of alcoholic intoxication than I have ever seen in Ireland for three times that period, while the scenes attending many vessels’ departure from New York must be seen to be believed.” It was early in 1928 when one Irish Times reporter quickly learned what most people would come to realise: prohibition wasn’t really working.

A widespread temperance movement in the US in the early 20th century led to the ratification of the 18th amendment and the passage of the National Prohibition Act, also known as the Volstead Act. Between about 1920 and 1933, the manufacture, transportation and sale of intoxicating liquors became illegal. Adherence to the law, as our reporter found out, wasn’t exactly across-the-board. Far from it.

“After less than fourteen days in the country I discover myself in profound disagreement with those who declare America to be devoid of a sense of humour,” reads the report, published on February 22nd that year. “It is a malicious calumny - malicious because it is uttered out of the full knowledge that the Volstead Act is still on the Federal Statute Book. Than America, I think that no country can cherish greater affection for a joke against itself. Else why is there prohibition?”

Prohibition had many effects on American society - chief among them the proliferation of criminal enterprise and incognito drinking dens. A lesser-recognised outcome was posited in this paper in 1920: “Men deprived of alcohol have been seeking consolation in manifold substitutes. . . He has now begun to devour ‘candy’. A diet of sweets has often been prescribed as a substitute for smoking, but, for the moment, at any rate, America has adopted it to quench her thirst.”

A far more serious concern for Irish people was reported a few years later - an unimaginable threat against tea. “The prohibition of alcoholic drinks in the United States has caused such an increase in tea-drinking there that there is a world shortage of tea,” reads a report in a 1924 news summary.

“In great Britain and Ireland tea has become so much a necessary that we find it hard to imagine a tealess world, and condole over the plight of our grandparents who had to pay sixteen shillings for a pound of the precious grains.”

For the intrepid reporter in 1928, the most remarkable consequence of prohibition was the rise of the so-called “speakeasy”, havens for thirsty rulebreakers.

“No place of business, I think, has been more aptly named than the ‘speakeasy’ - so called for reasons that doubtless will be familiar to any Irish publican who still plies a furtive trade long after his assistants have donned their coats and taken themselves off the premises,” reads the report.

Ignoring prohibition seemed not to be particularly attached to any one type of person. Among the offenders, the reporter found out, were police officers.

“It is was not the least of my astonishment that when conducted for the first time to one of them I beheld two or three policemen reclining in graceful attitudes against the counter drinking their small glasses of rye whiskey.”

The reporter had a local reporter as a guide on the assignment, who explained “that it was no party of the policeman’s duty to bother about this sort of liquor traffic. It was the job of the federal agents, and, any way, there was ‘a lotta graft’ in the whole thing and no speakeasy need be raided if the proprietor knew his business.”

The dens were familiar to the the Irish Times journalist in appearance, and not much different to your typical Irish pub: “It had the usual ‘bar’ fittings, plus a picture of Dr Douglas Hyde, and men stood round talking and drinking their glasses of beer as if it were the most natural thing in the world.

“I should mention that business was carried on under cover of a trade in confectionary, which trade was conducted, but not very busily, in the part of the premises opening immediately on the street.”

In one sense, it could be argued that speakeasies saved people from themselves; specifically, from potentially dangerous home-brewed concoctions they may have whipped up in their baths. This function, the reporter suggested, helped authorities turn a blind eye.

Coverage of prohibition in The Irish Times seemed to indicate little appetite for a similar regime here. “Prohibition, of course, is quite hopeless,” reads one article in this newspaper in 1922, “the American experiment has pricked that bubble, and we hope that the Irish Free State will leave it severely alone.”

By 1933, even Irish teetotaller groups were quick to criticise prohibition, though perhaps not to the same degree. Addressing a gathering of pioneers at St James’s Park in Kilkenny on June 5th, 1922, Rev P J Gannon said the “failure of prohibition” demonstrated that an entire population could not be coerced into “total abstinence”.

Distillers were less concerned about an impending spike in frivolity

“It had failed, not, perhaps, as completely as many made out, but it had failed upon the whole, because the ground had not been sufficiently prepared for it.”

Illicit trading had taken hold, mainly because too many people would pay any price for a drink. “Yet the daring experiment would have left its mark on the lives of the people: it was hardly likely now that the old abuses would reappear,” he said.

The reverend warned against a return to the “very merry, dancing, drinking laughing quaffing and unthinking time,” before the first World War. In the same month, distillers were less concerned about an impending spike in frivolity, with The Irish Times reporting eager preparations to refill US stocks.

“Irish distillers and brewers continue to be deeply interested in the arrangements which the government of the United States will make for the import of spirits, ale and stout of high percentage, consequent on the removal of prohibition,” begins a report on December 2nd, 1933 under the headline: WHISKEY FOR AMERICA/ 4,000,000 GALLONS IN TWO MONTHS/ HOPES OF FREE STATE DISTILLERS.

If the impression left on the Irish Times reporter on the ground in 1928 was to be relied upon, distillers had reason to be optimistic about demand: “I conclude merely by suggesting that for the visitor to America there can be no sounder advice than that he proclaim to all whom it may concern, be it intimate friend or chance acquaintance, that he is a fanatical teetotaller: for nothing is more surely murderous than American hospitality.”