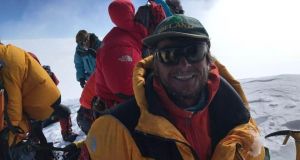 Noel Hanna at the summit of K2 earlier this month. Photograph: Facebook

Co Down climber Noel Hanna (51) who is one of the first Irishmen to survive an ascent of K2 says he would do it all again.

Hanna has a habit of that, having climbed Everest eight times – twice with his wife, Lynne.

However he says his home mountain of Slieve Donard in the Mournes “never gets any easier” in spite of his many 8,000-metre ascents.

Hanna, from Dromara, Co Down, is a professional mountain guide and a “close protection” bodyguard who provided security for former US president Bill Clinton on one of his visits to Ireland.

Speaking to The Irish Times by satellite phone while on the four-day trek out of base camp, Hanna said that weather had been the biggest factor in allowing both him, and Donegal man Jason Black, to complete the 8,611m ascent last weekend.

Both extreme athletes, on separate expeditions, were making their second attempts of K2.

The double summit has been described as one of the most significant achievements in Irish high altitude mountaineering since Belfast architect Dawson Stelfox became first Irishman to reach the top of Everest on May 27th, 1993.

“You can be the strongest climber in the world, but conditions will let you down,”Hanna said. “The weather window allowed Sherpa teams to fix ropes, and we could work on setting up camps.”

Hanna’s ascent and descent to base camp took place all in one day last Saturday – an endurance record of its own – while Black reached the summit on Sunday morning.

Both Irishmen were out on acclimatisation routes in early July when they witnessed Canadian climber Serge Dessureault (53) fall to his death.

Last weekend, Japanese climber Kojiro Watanabe (41) was descending through a hazardous section of K2 known as the “bottleneck” at 8,300 metres when he also lost his life.

“I knew Serge very well, and we discovered we had done the same adventure races in 1999 and 2000,” Hanna said. He met Dessureault’s climbing partner Nathalie Fortin shortly after it happened.

“It is the nature of mountaineering. It makes you that bit more careful – you will clip on to more than one rope,”he says.

Hanna was leaving K2 base camp on Wednesday when he met a Russian climber who he had rescued on Everest in 2010 when he was hit by snow blindness.

His next expedition may be to one of many unclimbed mountains in the Nepal Himalayas as that is what appeals to him now.

Co Limerick climber Ger McDonnell was first Irishman to climb K2 but was one of 11 people to die on the mountain in early August, 2008. A plaque in his memory was placed at K2 base camp this month by Jason Black.