Footage has emerged of the sole survivor of an Amazon tribe who has been living in isolation for 22 years. Video: FUNAI 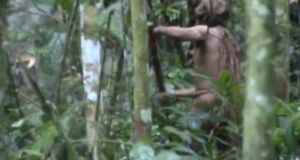 A screen shot from a video showing the uncontacted indigenous man who has lived alone in an Amazon forest for at least 22 years.

Remarkable footage has been released of an uncontacted indigenous man who has lived alone in an Amazon forest for at least 22 years.

Semi-naked and swinging an axe vigorously as he fells a tree, the man, believed to be in his 50s, has never been filmed so clearly before and appears to be in excellent condition.

“He is very well, hunting, maintaining some plantations of papaya, corn,” said Altair Algayer, a regional co-ordinator for the Brazilian government indigenous agency Funai in the Amazon state of Rondônia, who was with a team who filmed the footage from a distance. “He has good health and a good physical shape doing all those exercises.”

Known as the “indigenous man in the hole”, he is believed to be the only survivor of an isolated tribe. He hunts forest pigs, birds and monkeys with a bow and arrow and traps prey in hidden holes filled with sharpened staves of wood. He and his group were known for building holes and his hammock is strung over one in his house.

Loggers, farmers and land grabbers murdered and expelled indigenous populations in the area in the 1970s and 1980s, and this man is believed to be the only survivor of a group of six killed during an attack by farmers in 1995. He was first located in 1996 and has been monitored by Funai ever since. A glimpse of his face filmed in 1998 was shown in Brazilian documentary Corumbiara.

Funai has a policy of avoiding contact with isolated groups and has protected his area since the 1990s. The indigenous reserve of Tanaru was legally set up in 2015. Axes, machetes and seeds traditionally planted by indigenous people have been left for the man to find, Mr Algayer said, but he clearly wants nothing to do with mainstream society.

“I understand his decision,” said Mr Algayer. “It is his sign of resistance, and a little repudiation, hate, knowing the story he went through.”

Fiona Watson, research and advocacy director of Survival International, a non-profit group that works to protect indigenous peoples, described the footage as “extraordinary” given that the 8,070 hectares of protected forest the man lives in is completely surrounded by ranches and farms.

“Funai has a duty to show that he is well and alive,” she said. “The crucial thing is Funai has managed to keep his territory.”

Survivors of other indigenous groups in the region have described how farmers shot at their backs when they fled raids on their villages, she said. In 2005, she joined a Funai mission to the reserve and saw the holes the man has dug around his territory, his house and his plantations - though she did not see the man himself.

“The fact he is still alive gives you hope,” she said. “He is the ultimate symbol, if you like.”

Funai specialists believe there are 113 uncontacted tribes living in the Brazilian Amazon - of which 27 groups have been confirmed - and one tribe living outside. There are also 15 uncontacted tribes in Peru, Watson said, and others in Bolivia, Ecuador and Colombia. Tribes hunt with blowpipes and bows and arrows and while their languages belong to linguistic groups, or “trunks”, they can also differ wildly from each other. - Guardian