What happened to the public bench outside Dublin's Powerscourt Centre?

Gardaí investigating after seat unpopular with businesses was destroyed 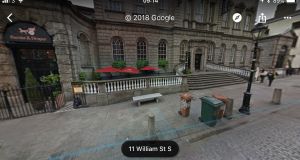 The bench, as shown on Google Maps before it was destroyed.

A granite seat which had become unpopular with local businesses in Dublin city centre was damaged beyond repair in the early hours of Thursday, May 31st.

The bench was positioned just outside The Powerscourt Centre on South William Street, an area which is home to a several popular bars and restaurants as well as a number of upmarket boutiques and other shops.

Dublin City Council was told that the bench was responsible for a recent rise in anti-social behaviour in the area and that many local shops, businesses and residents had become concerned.

“This seating area is fast becoming awash with anti-social behaviour, drug taking, drug selling and general drunkenness and aggressive begging are the order of the day,” said councillor Mannix Flynn, who called for the bench to be relocated “to a more appropriate area in the vicinity” at a recent meeting of the city’s South East Area Committee.

“Many shops and business as well as residents in the area are concerned about the escalation especially late into the evening and the early hours of the morning,” he added.

By the time the matter came before the city council it appeared the controversial bench had already been dealt with, according to documents of the meeting seen by The Irish Times. “The granite seat referred to was damaged beyond repair on the morning of 31st May 2018 and has now been removed,” council management said. “Gardaí are investigating the matter. There are no plans at present to reinstall a seat in the same location.”