August, 1928: ‘May I draw attention to the urgent need for better bathing places for ladies near Dublin, and particularly at Dalkey?’ 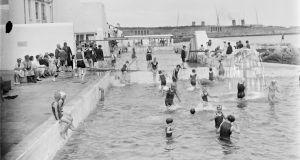 “May I draw attention to the urgent need for better bathing places for ladies near Dublin, and particularly at Dalkey?” Nearly 100 years has passed since that sentence was published in an Irish Times Letter to the Editor, yet the same stretch of shoreline remains in the news.

The recent announcement that Hawk Cliff beach in Dalkey would become nudist-friendly prompted a letter of opposition from a concerned resident last month.

As The Irish Times reported on July 31st, local resident Lorraine Montgomery - via a letter to the Dalkey Newsletter - said the beach was a public amenity which “shouldn’t be hijacked by a few”.

“Hawk Cliff is unique in that it is the only high amenity bathing area on the coast situated in the area of outstanding natural beauty, where families can come and bathe and picnic and enjoy themselves,” she wrote.

But last month’s article was not the first time Dalkey’s bathing spots made the pages of The Irish Times.

Ninety years ago today, the following letter was published under the headline: “Bathing places for women.”

“Sir - May I draw attention to the urgent need for better bathing places for ladies near Dublin, and particularly at Dalkey? Formerly there was a bathing place just beyond the Coliemore Harbour, which was closed a couple of years ago, presumably during the ‘bad times’, and has never since been reopened. The boxes are still there, but a notice is up: ‘Trespassers will be prosecuted.’

“The sea should be free to all, and it seems very unfair that the entire coast between Bullock and Killiney should be enclosed in private places. This means that the would-be bather must go as far as the Vico road, where there is a good bathing-place for men, but women and children are obliged to descend by a steep path and many flights of rough and uneven steps to the shore bordering on Killiney.

“Early in the season this shore is most attractive, but now it is s crowded and strewn with dirty papers and debris of all sorts. By going early one may avoid the crowds, but never the legacy they leave.

“The north side of Dublin is preferable in many respects. At Howth there is a public path all along the cliff, and one can bathe wherever a descent to the shore is possible. Following the directions in the “Irishman’s Diary,” I found my way last week to the Red Rocks and had a most enjoyable bathe, but, alas! there also picnic parties had left unspeakably ugly remains, while at Sutton, where I bathed another day, the shore was covered with broken glass, etc. It is bad enough when people throw papers and cigarette boxes in the street, but there, at least, the Corporation employees clear them away, whereas on the shore above high-water mark the rubbish will await next winter’s storms.

“For the cyclist good bathing can be obtained between Portmarnock and Malahide along by that road which is prohibited to motorists, and is in consequence a paradise to cyclists.

“Another crying need is for more and better tea-places with open-air accommodation. Along the sea front between Dublin and Dalkey there are no attractive tea-places, none at all at Sutton and Baldoyle, and a very inadequate supply at Dollymount.

“Personally, I have bathed at nearly twenty different places along the coast between Jack’s Hole on the south and Loughshinny on the north side of Dublin, and I can recommend a couple of tea-places at Malahide and Portmarnock, Howth, Dalkey, Killiney and Wicklow, but there was nothing at Kilcool or Newcastle. Now that the bus services make transport so easy, and when we are favoured with real summer weather, the facilities for bathing and refreshing ourselves should receive proper attention in order that we may get full benefit from the natural beauties that lie within easy reach of of our city.—Yours, etc, MLS.”