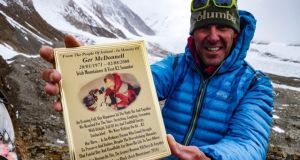 K2 summiteer Jason Black from Letterkenny, Co Donegal, with a plaque he took to the K2 base camp in memory of the first Irishman on the K2 summit: Ger McDonnell of Kilcornan, Co Limerick.

When Jason Black became only the second Irish man to survive an ascent of K2, the world’s second highest mountain, he had already witnessed one colleague falling to his death and another having a fatal accident on the descent.

“So yes, I was frightened, and I can’t play this experience either down or up,”the 47-year-old told The Irish Times from K2 base camp in the Karakoram range in Pakistan.

An extreme athlete from Letterkenny, Co Donegal, Black is one of two Irishmen to reach the summit after climbing the 8,611m-high mountain, which has a 25 per cent fatality rate for those attempting.

Stable weather allowed for 32 ascents of the mountain last weekend. Although it has been one of K2’s busiest seasons, fewer than 400 have climbed it since 1954 – compared to 4,833 people who have summited Everest.

Black knew Japanese climber Kojiro Watanabe (41), who fell last weekend during the descent in an area known as the “bottleneck” at 8,300m.

“I had been speaking to Kojiro on the way up, and he was not far behind me on the bottleneck, but I didn’t know he was missing till hours later,” Black says.

Dessurealt, a Montreal firefighter, had been with Black on a first attempt of K2 three years ago.

“We were both part of an expedition which was hit by weather in 2015,” Black says. “He was just above camp two several weeks ago when he slipped.”

An eight-hour approach to the summit through the “bottleneck” was the worst part of an ordeal which was “hell and back at times”, he says, and risks the lives of Sherpas who maintain fixed lines for safety.

“I think God was also my Sherpa, though, because at one point you are on a traverse which is one foot wide and with a 1,000ft drop below.”

The death of his mother, Freda, from cancer when he was just 17, the loss of his younger brother Billy in a motorbike incident some 20 years ago, the support of his family and his determination to survive bullying at school were factors that contributed to his success, Black believes.

With him was a Tricolor and a banner from the Irish Red Cross, which had appointed him as an ambassador.

He also carried a jumar or ascender device given to him by Gertie McDonnell, mother of the late Co Limerick mountaineer Ger McDonnell, who died after becoming the first Irish climber on K2’s summit in 2008.

A talk by the first Irish man on Everest, Dawson Stelfox, at Letterkenny Institute of Technology in the early 1990s had inspired him to train for high altitude climbing, Black says.

“I stayed back and he spoke to me for a good half hour, signed my Everest booklet and I framed the page afterwards.”

“I had been a cub from the age of seven, and the great outdoors was in my DNA,” he says.

“School was hell and I used to run out into the mountains to forget the bullying. But I think young kids today have it far worse, because I could escape when the school day finished, but there is no escape from cyberbullying.”