Fat rat stuck in manhole rescued by firefighters in Germany

A team of volunteer firefighters were called to the scene of an unusual emergency in the western German town of Bensheim-Auerbach after a fat rat was found wedged halfway through a manhole cover. Video: Berufstierrettung Rhein Neckar 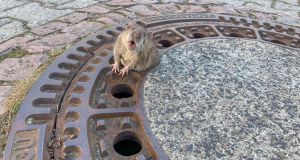 A fat rat stuck in a sewer grate in Germany. It took about eight firefighters and an animal expert to rescue the rodent from the drain. Photograph: Berufstierrettung Rhein Neckar/ Freiwillige Feuerwehr Auerbach 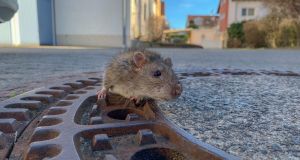 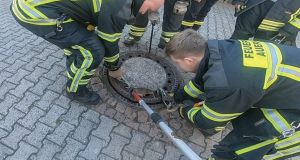 A multi-agency rescue operation has taken place in the town of Bensheim in Germany after a tubby rat became stuck in a manhole cover.

The rat, still plump with “winterspeck” - which translates literally as winter bacon and refers to extra pounds piled on in the colder months - became stuck after it tried to squeeze through a small gap in the sewer cover.

The Auerbach volunteer fire brigade was called in, as was the Rhein Neckar animal rescue team, and together a team of about eight rescuers was able to raise the cover and pull the rat free.

It took about eight firefighters and an animal expert to help the rat to freedom.

”The rat had quite a lot of winter fat and got stuck on its hips – nothing was going forward and nothing back,” animal rescuer Michael Sehr told news agency DPA.

Photos of the rat showed its head and rotund torso poking out of the hole, with its bottom half obscured by the sewer cover. In one image it seemed to almost be calling for help.

“The animal was subsequently released again into the wild. The fire department’s operation was completed after a good 25 minutes,” said the Auerbach fire department.

After the successful rescue, two young girls presented the animal rescue team with a gift to say thank you - a drawing of a rat surrounded by love hearts, with the word “danke!” written on it.

Sehr told DPA he did not have any qualms about rescuing the rat.

“Even animals that are hated by many people deserve respect,” he said. – Guardian.