Burglars use sewers to break into bank in Antwerp 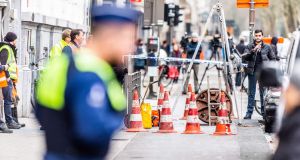 Police cordon off the area outside the French BNP Paribas Fortis bank branch, following a robbery in the centre of Antwerp, Belgium. Photograph: Jonas Roosens/AFP/Getty Images

Detectives in Antwerp have been scouring the sewage pipes under the Belgian city for clues after burglars apparently used them to break into a bank before fleeing without trace.

An initial investigation suggests the thieves started out in a building opposite the BNP Paribas Fortis bank in the early hours of Sunday morning. They then hand-dug a tunnel almost 4m (13ft) in length in order to connect with a sewage pipe running under the road.

From there it seems the burglars crawled for hundreds of feet through the pipe – said to have a 40cm diameter – before digging another 4m tunnel and emerging among the bank’s vaults.

The first the police knew of the heist was when the bank’s security firm sounded the alarm on Sunday afternoon.

Willem Migom, a spokesman for Antwerp police, said: “A tunnel to the sewer system has been found. We first had measurements carried out on gas to see if it was safe to descend into it. In the sewerage we then found a second tunnel that led to a building in the Nerviërsstraat.”

BNP Paribas has declined to comment on the size of the burglars’ haul. A number of the bank’s vaults are said to have been opened. A building on the opposite side to the bank on Nerviërsstraat was raided by the police on Sunday. One unnamed person was taken in for questioning.

The first the residents of the central Antwerp district knew of the incident was when police raised all the manhole covers running down the centre of Nerviërsstraat on Sunday afternoon.

One woman in an adjacent street told the Het Nieuwsblad newspaper that she had heard “a lot of banging” from the neighbours in the past few days.

The newspaper likened the crime to the infamous 1976 Ocean’s Eleven-style bank robbery when 13 robbers used the sewers to break into the vaults of the Société Générale bank in central Nice. That gang cleared 370 coffers of gold ingots, cash and jewellery valued at 50 million francs – about €27 million today – before fleeing just in time to escape the rising sewage that was flooding the bank.

Roger Moorthamer, a spokesman for the federal police, said: “We have no idea at the moment who the perpetrators are.”

Els Liekens, an engineer at the engineering company Aquafin, told Het Laatste Nieuws that the robbery had been extremely risky. “When it starts to rain, rainwater enters the sewers and can fill up very quickly, which can lead to drowning if you are there,” Ms Liekens said. – Guardian