Researchers in New Zealand were in for a surprise when they defrosted some leopard seal faeces to find a fully functioning USB key buried in the sample - mystery now surrounds the owner of the footage saved on it. Video: NIWA 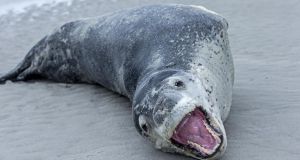 Krista Hupman, a biologist in New Zealand who studies the faeces of leopard seals, knows they can contain surprises like feathers, fish bones and birds’ feet. But on Wednesday, she described “definitely the weirdest” find yet: a USB drive containing photos and videos of a tourist’s holiday.

Now Ms Hupman, a research scientist at the National Institute of Water and Atmospheric Research, wants to reunite the USB drive with its owner. The seal poop, Ms Hupman said, was collected from Oreti Beach in the Southland region of the South Island of New Zealand in November 2017, and frozen for a later study of the animal’s diet. Two volunteers defrosting the faecal matter last month discovered the thumb drive and called Hupman.

“They said: ‘You won’t believe what we’ve found,’” she recalled. On the memory stick – discovered intact and with the cap still on – were images of wildlife taken at Porpoise Bay, almost 100km from where the poop was collected, but no identifiable human faces. Some images included a blue kayak, which the researchers hope might be recognisable to the stick’s owner.

Ms Hupman is part of a team studying leopard seals, an Antarctic species increasingly being seen farther north in New Zealand. The researchers are trying to find out why. Four people have come forward to claim the USB drive since its existence was reported Tuesday, but Ms Hupman said she did not believe any of them was the actual owner. Claimants have to answer questions about the contents of the drive, including recalling some descriptive file names.

On social media, New Zealanders agitated for a resolution to the mystery. “This is the most NZ CSI ever,” one Twitter user wrote, while another rewrote the lyrics to the Police song “Message in a Bottle” to reflect the fate of the USB drive in the digestive tract of a “constipated seal”.

Hupman said she hoped the publicity would encourage visitors to New Zealand’s beaches to help with the scientists’ research. Her website lists instructions for how to scoop up seal scat found on the beach, freeze it and get it to her team. “Weirdly enough, you can put it in the post,” Hupman said of the scat. “You just need to make sure it reaches its final destination in a frozen way.” – New York Times