‘A one-person newsdesk’: Predictions from an early computer age 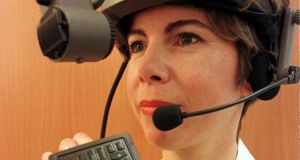 Xybernaut wearable computer 133P, demonstrated on April 21st, 1998; the photo was published in The Irish Times on the 27th. Photograph: AP

In April 1998, Windows 98 crashed live on stage while Bill Gates looked on. Michael Cunningham, in his last outing as editor of The Irish Times “Computimes” page, took the chance to take a withering dig at the laggy operating system: “It was a fitting reminder that even if you’re the richest man in the world (or just one of the millions of ordinary computer users who made that man rich), when it comes to those unpredictable Windows breakdowns we’re all equally mortal,” he wrote.

“Windows is unreliable. So much so that PC Week once wrote: ‘Windows 95 is like a B-l bomber with a belly full of fuel and bombs flying on three engines.’ Only, it might have added, B-l bombers don ‘t crash as often.”

The comments appeared in a listicle detailing the 33 things Cunningham hated about computers. The hitlist derided error messages, email fluff, data death, microsoft (of course), “faxmania”, and buggy programmes: “Web browsers in particular are notoriously prone to freeze or crash — thanks to the increasingly ruthless ‘browser wars’ they are being rushed out in indecent haste, several times a year instead of truly stable packages.”

Many of Cunningham’s issues 21 years ago would likely still resonate (bar a couple, “floppies on Mac” among them.) Hardware advancements were taking hold at the time, too. The same edition discussed the newsroom of the future and featured this wearable contraption:

But this piece came post-internet. The familiarity with computers by the end of the 90s is a world away from the new frontier the technology embodied in the early years of the previous decade, when games machines from Commodore and Atari were synonymous with “home computers”.

In the 1980s, former science editor Dick Ahlstrom brought much of this newspaper's computer news to readers. In one of his special reports in 1983, he examined future developments, long before the luxury of complaining about browser speeds.

“State of the art computer technology is changing so rapidly that it is difficult to know just what the future holds,” Ahlstrom wrote on March 8th that year.

Among the “science fiction like” functions future users could expect were voice recognition and translation. Some teething problems had existed with translation programmes to date, particularly in the selection of a word's correct context: “Typical examples which have been passed on include a translation of ‘the spirit is willing but the flesh is weak’ into ‘the booze is good but the meat is poor’, and a rendering ‘out of sight, out of mind’ into ‘invisible idiot.’”

The applications of programmes that could adjust and “learn” were endless, while post and banking would likely be transformed.

“With electronic banking, financial transactions in real terms can take place without cash and in any location. One scenario proceeds along the lines of the person phoning in a shopping order to a supermarket and then paying via electronic authorisation,” said Ahlstrom. “This type of banking is not far away.”

“Another area is automated post," he said. "Instead of sending letters via the post office you can send mail via computer terminals."

David Agleo, in a piece later that year (and still before the full nascency of modern computer vocabulary), told readers about the “hand operated Mouse” accompanything the Apple Lisa that let you perform functions without touching the keyboard - “All you have to do is point to symbols on the screen.”

Multiple applications running at the same time meant the interface resembled office space; “... it allows us to treat the screen rather like we treat our desks and hop from one task to another in a somewhat random fashion - the messy desk phenomenon which characterises many offices today.”

The pages of The Irish Times began to gradually fill with ads for computers as functionality increased. As offices and businesses adopted computers for day-to-day operations, notices for computer training courses grew in number.

Not everyone was settled about the home user market. “A bitter wind is blowing through the world’s home computer industry,” reads another piece in April 1985.

“The year has started with a flurry of casualties and there is every sign that a price war has begun on both sides of the Atlantic,” reads the report. “This once brash and confident industry is now nervous and uncertain. No one seems to know what 1985 will bring . . . other than trouble.”

It wasn’t s question about whether the home computer would be a mainstay - “the home computer is not to be written off as an amusing phenomenon on a par with skateboards” - rather, the exact type and functionality of the computers which the normal person would use in the home was pending.

“Companies are developing a wide variety of new applications for computers — from terminals for electronic banking and shopping to controlling the electrical devices around the home. Eventually the computers and interactive video discs will transform the educational and games markets and allow the storage of vast amounts of information.”

The end of the decade saw switch. Headlines stopped spouting the promise that “computers are the future”, and instead focusing on “networks” - and the communication between computers. Changes, too, were predicted in the publication of the written word.

“By 1992, very likely, a small word processor will be comparable to an electric typewriter in price,” reads an early prediction by Ray Comiskey in The Irish Times in April 1982, adding that manuscripts will no longer be printed; tape or floppy disc would become the norm.

“The additional spin-off from new technology affecting the making of printers’ plates will greatly reduce costs in this area,” it says, envisaging low-cost first print runs and a 10-year jostling for position in the word processor race.

The changes to the printing process would affect journalism, and come along in half the time predicted by Comiskey. At an event in Dublin in May, 1987, titled Newspapers — Views of the Future, Joe Ungaro, then president and publisher of New York’s Westchester Rockland Newspapers, said computers would come to control every phase of newspaper publication.

The mechanical age of printing and publishing was already dead, as far as he was concerned, but that didn’t mean “print” was dead. “If democracy is to survive in this world, newspapers are extremely important . . .Your newspapers are threatened by economics.”

He said: “By the last decade of this century, we will be able to go from the mind of the reporter, to the printing plate, with all the steps taking place within the computer.”

The event heard from trade unionists and others highlighting the fall in revenue from newspaper sales and loss of jobs as printing mechanics changed. For his part, Mr Ungaro was optimistic about where the computer revolution would take society: “We are now evolving into a society dominated by information and service. The decades ahead will see education, knowledge and information placed on the highest pedestals in our society.”