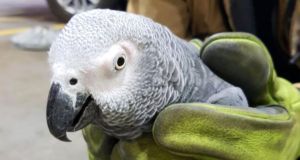 When a Dublin Airport fire crew was carrying out a routine runway inspection they came across an altogether unexpected kind of airborne emergency.

Fire fighter Craig Wade spotted a wandering African Grey parrot – presumably taxiing for takeoff – and got to him just in time to ground his flight.

In the end, a series of tweets – the social media kind – and a tip-off from a Lidl shopper who happened to spot a “missing parrot” poster in one of their stores, helped trace the owner.

Or did it? Dublin Airport has now been contacted by three separate people laying claim to the wandering pet, which is currently being cared for by professionals.

Thanks again for the heads up @lidl_ireland. We’ve been in touch with him. Also had contact from some other possible owners. Working to get her back home now. 🦜🦜 https://t.co/0b9IBqt7TV

Our firefighter Craig Wade found this African grey parrot during a routine runway inspection earlier this week. She’s being given specialist care & is calm & doing well. We’d like to reunite her with her owner. Please RT to help us find them & DM us if she is yours. 🦜 🦜 pic.twitter.com/aIIImvzL6p

The mysterious case of the bird and runway began on Sunday when the airport fire crew, searching for “foreign object debris”, encountered the most unusual kind.

It eventually flew onto their truck and was gently coaxed into a make-shift cardboard cage (complete with holes) before being brought for a check-up.

Dublin Airport dispatched an appeal via social media which quickly caught the attention of one woman who told them about the Lidl posters.

In response, the supermarket contacted airport authorities and put them in touch with the owner of that particular bird.

An airport spokesman said they are now working to ascertain the proprietor as quickly as possible in order to reunite them, and appealed to anybody else who might have lost an African Grey to contact them via social media.

If one thing is for certain it is that this parrot’s feathers do not ruffle easily – undeterred by incoming aircraft or approaching fire fighters, neither was it put out by the regular “bird scaring” activities around the runway, including loud noises and fake hawks employed to keep flocks away from airplanes.

“Obviously in the case of this parrot, she wasn’t scared,” said the airport spokesman, “she was walking alone the end of the runway – I’m not sure where she was trying to get to.”