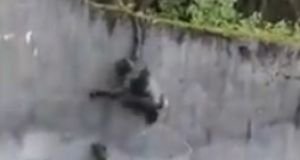 A screengrab from a video posted on Twitter of a chimpanzee escaping from an enclosure at Belfast Zoo.

Several chimpanzees used a branch to escape an enclosure at Belfast Zoo on Saturday.

The zookeeper blamed recent stormy weather for weakening trees inside their corral as visitors had a closer encounter than planned.

The primates turned a limb into a makeshift ladder and scaled high walls surrounding their pen in Northern Ireland, footage posted to social media showed.

Shocked visitors described seeing one of the mammals emerge from the bushes onto a path at the animal park north of the city.

Other chimpanzees were filmed sitting atop the walls. The great escape ended when the animals returned to their quarters.

The moment some chimps at #BelfastZoo escaped from their enclosure, using broken branches after #StormErik pic.twitter.com/LvplO6hrcu

Video captures Chimps walking freely around Belfast Zoo after escaping over their wall on Saturday afternoon.

All the Chimpanzees have been accounted for and are back in their enclosure. 🐒 🙊

It was the second breach in recent weeks after an endangered red panda went missing when electric fences failed. The animal was recaptured in the driveway of a nearby house.

Belfast City Council, which runs the zoo, said: “Zookeepers were present as the chimpanzee quickly returned from an adjacent wall to the rest of the group inside the enclosure.”

Zookeeper Alyn Cairns said trees in their enclosure have been weakened by the storms, allowing the creatures to break them and use them as a ladder to escape.

He told the BBC: “They’re intelligent primates and know they’re not supposed to be out of their enclosure, so got back in themselves.”

Elaine Monaghan’s grandchildren were at the zoo at the time.

“Why weren’t the enclosures checked? This could have ended very badly,” she said. “This is how close it came to my grandchildren.”

She said she was happy the incident had ended well for her family.

“Having four children with them they tried to act as calmly as possible so as not to frighten the kids.

“Everyone has their own way of reacting. Had it been me I’d have run for the hills.”