Brexit is a big blue furry monster, say the Dutch 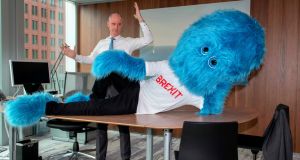 The British government may still not be clear on what Brexit looks like, but the Dutch have a pretty good idea: it is a giant blue furry monster that sprawls annoyingly across your desk and stops you getting any work done.

The Netherlands’ foreign minister, Stef Blok, on Thursday tweeted a picture of himself with the enormous Muppet-like creature lying in front of him in a white T-shirt emblazoned with the word “Brexit” in big red letters.

“Have you checked what consequences Brexit has for you or your company?” asked Blok, his arms lifted in mock exasperation and a somewhat unconvincing look of frustration on his face. “Make sure Brexit doesn’t get - or lie - in your way.”

The tweet also includes a link to an official government site, brexitloket.nl, where Dutch companies can do a full “Brexit scan” of their business, calculate the impact on their bottom line, and take steps to reduce the fallout.

The Netherlands is among the best-prepared of all the EU27 for Brexit - particularly if the UK leaves the EU without a deal on March 29th - but the government has said it is still concerned that too few Dutch businesses are fully aware of all it might entail.

As part of a €100m Brexit preparations programme, it launched a major public information campaign last month including newspaper ads and rhyming radio jingles warning businesses they could not afford to be taken by surprise and would have to be creative in their approach to likely problems.

Products will probably be held up for longer at customs, UK-issued certificates and licences may no longer be valid and data transfers could be affected, warns the campaign. It will show the Brexit monster physically frustrating Dutch businesses by, for example, getting in the way of trucks and production lines.

The UK is one of the Netherlands’ key trading partners and the government, which estimates even a soft Brexit could cost the country 3 per cent of its GDP over time, is also awarding cash grants to companies to help them pay for specialist advice or explore alternative markets.

But the Dutch also stand to benefit: the European Medicines Agency has moved to Amsterdam from London; more than 40 companies, including electronic giants Sony and Panasonic, are shifting their European HQs to the Dutch capital, and authorities there say they are in talks with 250 others.

The Dutch prime minister, Mark Rutte, said in an interview with European newspapers including the Financial Times on Wednesday that Britain would be “diminished” by Brexit, adding that a no-deal departure would be “devastating” and “insurmountable” for the British economy.

“At the moment the ball is rolling towards the Dover cliff and we are shouting: ‘Stop the ball from rolling any further,’ but nobody is doing anything at the moment, at least not on the UK side,” Mr Rutte said.– Guardian News and Media