Marmalade, a world champion hatcher, to be stuffed, ‘immortalised’ and put on display 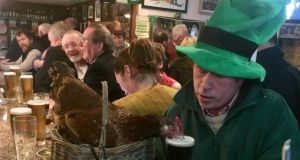 A Co Offaly farmer says he is “absolutely devastated” after his world record breaking hen died suddenly this week.

Marmalade, a red mottled leghorn, died aged just 4½. She was the three times world champion hen for her prodigious hatching. She had an average of five clutches of chicks a year and has hatched 181 live chicks in total though she trampled on a few others too and killed them.

Such was her fame that she was the star attraction and her owner John Dolan the grand-marshal of the Banagher St Patrick’s Day parade last year. They even stopped off in a pub where Marmalade supped from a pint of Guinness.

Mr Dolan said 85 per cent of hens do not hatch at all and the ones who do would be pushed to hatch twice a year which made Marmalade an extraordinary phenomenon of nature.

“Every hen loses their hen feathers in the month of October or November and they stop laying for six weeks, but Marmalade for some unknown reason never lost her hen feathers,” he explained.

“Marmalade brought out chickens during the snow, the frost and even during Hurricane Ophelia. The noise and the thunder weren’t able to kill the eggshells.”

Her death happened just two months before the Guinness Book of Records intended to certify that she was the most prodigious hatcher in the whole of hen history, he claimed.

Mr Dolan said Marmalade died in his arms on Thursday morning. She had gotten sick on Monday. “Her poo turned green” he explained.

Mr Dolan went to the vet thinking she had a vitamin deficiency, but her condition rapidly deteriorated. He gave her porridge which she loved, but it was not enough to revive her.

“I would say it was a system failure from over-production over the last two years,” he said.

An emotional Mr Dolan added: “My father and mother died. It was the same kind of shock. I don’t think I will ever recover from this. I will never be the same John Dolan.

“I’m renowned as a very outgoing, jolly person. I’ll never be able to go out to the shed with the same kind of enjoyment I had with her. That sadness will go to the grave with me. I cried and cried. I’m an emotional kind of a person. I can’t come to terms with this.”

He explained that hens can be expected to live between 12 and 14 years and Marmalade could reasonably have been expected to have had many years of record-breaking hatching in front of her.

Nevertheless, his prized hen will be immortalised. “I would have had an autopsy, but she’s been stuffed at the moment,” he explained along with three of her dead chicks.

Marmalade and her chicks will be put into a glass cage with a view to putting her on permanent display somewhere. “There will never be another Marmalade. Her record will stand forever more,” he said.