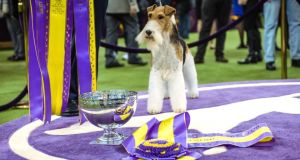 When King, a wire fox terrier, won best in show at the 143rd Westminster Kennel Club Dog Show on Tuesday night, it was not a crowd-pleasing announcement.

Of the 112 best in show titles awarded at Westminster, wire fox terriers have now won 15 times, more any other breed. Next closest are Scottish terriers, with eight wins.

As a group, terriers have a record at Westminster that even the most storied sports dynasties would covet. The terrier group has been awarded Best in Show 47 times, making them the New England Patriots of the dog show world.

“After you win this show, there’s really nothing else to do,” King’s handler, Gabriel Rangel, said when asked what King would do next after the win. “He should be running around in some grass field.”

King beat an intriguing group of contenders: Burns, a longhaired dachshund; Bono, a Havanese; Baby Lars, a bouviers des Flandres; Wilma, a boxer; and Bean, a Sussex spaniel. Judging by the reaction, the crowd was hoping for a somewhat less predictable, and more fun, winner, a dog like Bean, perhaps.

When he ambled around the show ring, the crowd erupted, chanting, “Bean, Bean, Bean!”

“It was unbelievable,” Bean’s handler, Per Ingar Rismyhr, said. “He definitely feeds off of that. He feels the energy. How could you not? He tries to play it cool but he really kind of likes it. Right, Bean?”

Bean did not answer. He was playing it cool.

While the finish was unsurprising, there was drama before Tuesday’s events even began. A day after winning the nonsporting group and a place as one of the seven finalists, Colton, a schipperke, was ruled ineligible for best in show because of a conflict of interest between the dog’s owners and the best-in-show judge, Peter Green.

Colton was allowed to walk onto the green carpet for the final judging before being awkwardly excused from the ring.

As a result, only six dogs competed for best in show, one fewer than usual. “It’s not the first time it’s happened at a best in show, but it’s the first time at this show,” Crista Cook, Colton’s handler, said. “If you have any business relationship with a judge and an owner, you shouldn’t compete.”

Cook characterized the connection between Colton’s owners and the judge’s family as a distant one.

Colton had already made a mark on the show Monday, becoming the first of his breed to win the nonsporting group. His win was especially significant given the fiercely competitive group, albeit one that is akin to an island of misfit toys.

The dogs in the other groups – sporting, hound, working, terrier, toy and herding – have clearly defined historical roles, but the nonsporting group is a collection of the leftovers.

“It’s rare to ever win the group,” Cook said. “We’re often overlooked going against the bulldogs, poodles and bichon frise.”

That made Colton’s disqualification particularly painful. Who knows when the chance to compete for best in show at Westminster will come again?

However, for King and future kings, the odds are good. – New York Times