In 1872, a man walked into a police station in the capital with a grim admission to make 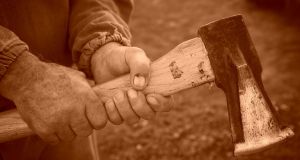 Constables were sent to number 48 Cork Street to investigate the claims. Photograph: iStock

It was early in the morning when Francis McConnell arrived to door of the police station at Newmarket in Dublin city. The out-of-work builder’s assistant had a confession to make.

When McConnell told officers he had just brutally murdered a 60-year-old woman with a hatchet at his home on Cork Street, their reaction was one he probably hadn’t expected. They didn’t believe him.

The victim of his crime, he said, was a woman named Anne Murray. For years, he had employed her as a domestic servant at 48 Cork Street, according to a report published in The Irish Times the next day, Friday, May 1st, 1872.

“It seems he made the further statement,” reads the report, “that he had taken the woman’s life by inflicting several cuts on her head and face with a hatchet, that the woman had immediately expired and that her body was lying in the apartment in which he had committed the deed.”

The claims seemed far-fetched, but this wasn’t McConnell’s first time in a police station. His prison records reveal a number of brushes with the law.

In 1868, McConnell was fined for writing and publishing false and malicious materials. He next appeared on the RIC’s radar in 1870, when he was charged with “threatening” – he posted bail on that occasion.

Originally from Tandragee, Co Armagh, records show that by the time he arrived to Newmarket station in 1872, he was 43 years old. The prison registers describe him as quite tall for the time, at 5 feet 11.5 inches. He had dark brown hair, sallow skin and his right foot was amputated.

The inspector had doubts about McConnell’s story, but he was kept in custody while a number of constables were sent to the apartment to investigate the claims.

In the back kitchen of number 48, police discovered the body. Crumpled on a “wretched” bed, they found “the ghastly remains of the old woman,” partially covered in an old quilt. A bloody crime scene, just as McConnell promised.

“On the floor was found a hatchet, smeared over with blood, mixed with long hairs,” the report says.

“The head of the unfortunate victim lying on the bed appeared to have been cut open in three distinct places, and the coverings were saturated with blood.”

Back at the station, McConnell had already admitted his guilt. There was no motive attached to the crime, but the report says, without going into detail, that a number of documents emerged which may have garnered a motive for Ms Murray’s murder.

McConnell was brought before the southern divisional police court on the day of his confession and ordered to appear at the coroner’s inquest. His fate wouldn’t be learned until nearly two months later.

An entry for McConnell appears in the index of convict files from 1872; across from his name, in the column where sentencing details are usually recorded, “Criminal Lunatic” is handwritten in red ink.

At a hearing on June 17th, 1872, at Dublin’s Green Street courthouse, McConnell was acquitted of the murder charge. “We find that the prisoner was insane at the time of committing the offence charged and we acquit him by reason of such insanity,” reads a transcription of the jury’s verdict. No further mention of any documents, or apparent motive, is made in his case file.

What we do know is that McConnell had been in custody at the Bridewell, where doctors deemed he was insane on the day he murdered Ms Murray. A brief, pro forma certification was received by the Office of Lunatic Asylums at Dublin Castle on June 26th:

“We hereby certify that we have examined Francis McConnell, now a prisoner in Richmond Bridewell, committed for murder and that we find him to be insane: and we are of opinion his case may be considered as curable, and likely to derive benefit from a district lunatic asylum.”

The document is signed by physicians named Minchin and Burns, as well as the governor, Boyd.

On the 2nd of July, the warrant for McConnell’s detention at the district asylum was written by Office of Lunatic Asylums and submitted the next day. On the 9th, the warrant was issued and McConnell was transferred to the Dundrum Asylum at the Lord Lieutenant’s pleasure.