When a Waterford father poisoned his sons in cold blood

In 1899, a young boy died after a fit. Suspicions arose when his brother soon met the same fate 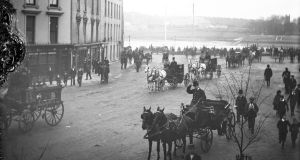 Eddie was in agony, gripping the iron bars protecting the window of an old house on Yellow Road in Waterford. The nine-year-old’s sister, Mary, a child herself, came to her brother’s aid after hearing his cries.

Eddie had left the house he shared with his father, Patrick, and seven siblings at about 10.30am to play with a friend. After finding him slumped on the ground, Mary brought him back into the house.

The complaint was unusual. By all accounts, Eddie had been in good health; he was described as a strong lad and had never spent as much as a day of his short life in bed. A few hours after collapsing on September 29th, 1899, he died amid what were later described as “fits” and convulsions, his fists clenched tightly into balls.

Eddie’s death was the second tragedy to befall the Dunphy family in a short time, following his mother’s death from cancer in April. The head of the family, 74-year-old Patrick Dunphy, was left as the sole guardian of the children. Mary, Patrick’s young daughter who had come to Eddie’s aid, had taken charge of the household duties.

By December, money had become scarce in the busy house on Yellow Road. Patrick and his eldest, Patrick jnr, had lost their jobs at the corporation. Another son, 11-year-old John, had been living at the a neighbour’s house, working as a messenger. In early December, John came home for the holidays.

On the morning of December 19th, less than 12 weeks after Eddie’s death, John got up early and ate his breakfast, polished his boots and went out to play. He was in a good humour, anticipating a trip to get a new set of clothes, promised to him by his father the night before.

His hands working as if in a fit; he could not stop, the perspiration was breaking out on his forehead

Patrick called John in from the street and the pair set out at about 12.30pm. They took a small tour of the city, which saw them visit the Mall and the Adelphi Hotel, before arriving to Cooney’s pub. Patrick snr called for a half glass of whiskey and a bottle of lemonade for John, who was still standing outside.

According to a report in The Irish Times on January 25th, 1900, Patrick gave the lemonade to John, who drank most of the liquid before leaving the pub and wandering down the street.

At 2pm, John was found lying against the door of an engraver’s house, “with his limbs stiff and rigid, the eyeballs staring out of his head, and his hands working as if in a fit; he could not stop, the perspiration was breaking out on his forehead, and while all this was going on the father was standing some 40 or 50 yards away,” according to a Munster Express report.

John was brought to the city infirmary, where doctors immediately became suspicious; the physical symptoms pointed to poisoning by strychnine, though Patrick would insist the boy had been prone to fits, like his deceased brother and mother.

On turning John’s body over in the bed, a dark liquid escaped his mouth and stained the bedsheet. The doctors had the presence of mind to cut out the piece of fabric and preserve it.

Along with the square of material, John’s organs were sent in jars to an analyst in Dublin, who estimated John had been given two or three “grains” of strychnine, with a lethal dose for a boy that size being between one-third of a grain and one grain.

Patrick snr was arrested and charged with murder; he went on trial at the Waterford Spring Assizes the following month.

“It was an altogether startling crime,” said the solicitor general, according to the Express. “It had startled the City of Waterford. The prisoner had laid aside all instincts of humanity; all instincts that a father should have for his son, because for a paltry consideration he had robbed his child of the life that had been given to it.”

The prosecution posited financial gain as the motive for the murder. It emerged Patrick had his children insured for modest sums, and had collected the payout for Eddie’s death just 30 minutes after he passed away the previous September.

“This insurance of children,” said the solicitor general, “made them an asset in the light of parents who were monsters, and converted them into something out of which money could be made.”

Patrick wasn’t on trial for murdering Eddie, though the prosecution pointed to the nine-year-old’s death in evidence. His body was exhumed and the contents of his stomach analysed, with the same doctor in Dublin confirming the presence of strychnine.

Curiously, when Eddie’s coffin was taken out of the ground, the breastplate read “John Dunphy”. As it happened, the prosecution said, John had been insured for £10 and Eddie for £9. When Patrick arrived to the offices of the Prudential Company after Eddie’s death, he told the agent, Mr English, John had died - he kept up the lie when he went to the undertaker, for the sake of an extra £1.

Dunphy protested his innocence. Shopkeepers testified, recalling Patrick snr purchasing two lots of strychnine - the first, in September, he said was for rats in the house. The second lot, in December, was allegedly for a dog that had been barking into the night, keeping him from sleep. At one point, Dunphy insisted he used the strychnine for a poultice for his leg. The mixture had contained sugar; he presumed the boys had taken sips while he wasn’t in the room.

‘A kind and affectionate father’

The defence pointed to the testimony of Patrick’s other children, who said their father had always treated them well. “Mr Battersby addressed the jury for the prisoner, urging that there was no evidence to show who administered the strychnine to the boy,” reads an Irish Times report on March 12th, 1900, “also that the evidence of his other children, who were examined at trial, showed that he had been at all times a kind and affectionate father.”

Unfortunately for the defence, the children also said there had never been rats in the house, nor a dog barking nearby, rubbishing his excuse for buying the strychnine in the days before the respective deaths of his young sons. A doctor also testified that no medical practitioner would ever prescribe strychnine for a leg poultice.

The jury found Patrick Dunphy snr of the murder of his son, John, and the judge sentenced him to hang on April 10th. At 74, Dunphy was considered to be an “extreme age”, according to one Irish Times report. A petition for reprieve was sent to the Lord Lieutenant, with applicants seeking the lesser sentence of penal servitude for life, or what little of it Dunphy supposedly had left.

Dunphy’s death was scheduled in the middle of a visit from Queen Victoria, who arrived in Dublin on April 4th. For weeks, the columns of The Irish Times had been filled with everything “Royal Visit”: details of Victoria’s agenda, minutes from decoration committee meetings, statements of welcome from officials and some quite laudatory poetry.

The above - the first stanza of a poem written by “EB” on March 9th, 1900 - may best capture the tone of the coverage in The Irish Times and other newspapers. With such a big occasion at hand, those seeking the reprieve likely thought it had a good chance.

The Lord Lieutenant did not see it that way. In response to the petition, he insisted the law must take its course, “owing to the exceptionally cold-blooded circumstances attending the crime.”

Dunphy was hanged at Waterford Jail on the planned date, 36 years to the day after the last hanging had taken place. In paying the ultimate penalty of the law, Dunphy became the first person executed in Ireland in the 20th century.