‘Scoundrels of the lowest type’: When the priests took on dancing

In the mid-1930s, Irish clergymen went to court to ‘stop to the evil of all-night dances’ 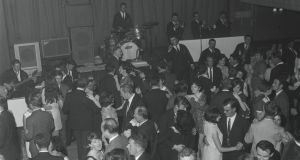 Dancing at the Metropole in Dublin in 1968. Photograph: Kevin McMahon

“Dance halls should be closed at 11pm at latest - otherwise, they (are) a menace to morality.” Bishop Patrick McKenna of Clogher didn’t mince his words.

All night dances, he said, were in direct opposition to the teaching of the church. “He was informed,” reads a report in The Irish Times in May 1935, “that young people left these halls at a late hour and went to lonely roads”.

“In this way, dance halls were conducive to temptation and were an occasion of sin. No all-night dances should be held, except with special permission of the parish priest,” said the bishop, speaking outside a confirmation in Bundoran, Co Donegal.

“He exhorted Catholics to put their heads together, and even if it meant monetary loss, to put a stop to the evil of all-night dances.”

It was the last time his name popped up in The Irish Times archive in the context of dance halls, but it wouldn’t be the last time clergymen in Ireland made an opposition to late dances, or the granting of licences to hold dances at all.

The Public Dance Halls Act 1935 regulated licences granted to premises to hold “public dancing”, or, as they called it, “dancing which is open to the public and in which persons present are entitled to participate actively.” Besides introducing a layer of red tape concerning building regulations, Garda inspections, time limits, sanitary facilities and operating hours, the Act forged a unique opportunity for people to derail individual dances.

Gardaí were entitled to make oppositions, as was anyone whom a judge deemed an “interested party”. Usually, that meant the parish priest.

So followed a period in The Irish Times when reports of monthly licence hearings and the attempts to block them were plentiful.

As one judge remarked in October 1938, some priests would oppose any dance, regardless of how late it was. Other opponents sought restricted hours. In a case at Listowel in September, 1936, frequent opposer Fr Browne suggested dances only be held from 6pm until 9pm.

“Dance Halls in England closed at 11pm, and apart from the question of morality, people could not work properly if they were dancing all night,” he reasoned, according to an Irish Times report.

The priest was wary, in particular, of outsiders – “devils”, as he saw them.

“Persons who came to these dances from outside towns in motor cars were scoundrels of the lowest type, and were devils incarnate,” he said.

“There was absolutely no need for all-night dances in country places, and there was only one way to deal with them, as the soupers were dealt with in the olden times - by excommunication. Dance halls were the curse and ruin of the country, and when the people were being demoralised the end is near, and so is the anger of God.”

“Man is a sociable animal,” the judge replied, “and he must find some sort of reasonable satisfaction for his social appetite.” The judge granted the dances until 10pm, but bowed to the priest’s demand that nobody from outside a three mile radius be allowed attend.

On the same date, priests objected to dance licences at Carrick-on-Shannon, due to the noise of the ceilidhe. “At 3 or 4 in the day people began punching and kicking the walls of the halls and beating a drum, and it was like bedlam,” they protested. The same judge granted two dances from 8pm to 11pm.

Though judges heard many oppositions from clergymen on moral grounds, there was rarely an outright refusal of a licence on those complaints.

‘Neither or use nor ornament’

An Irish Times report on January 19th, 1939, detailed the case of a man seeking to put on dances at Ardarrig, Ballyhaunis, Co Mayo. His application was met with staunch opposition by two clergymen: Reverend Prendergast and Fr Curley.

Fr Curley said he had no specific problem with the place or facilities, but “on general principles, of course, we object in this diocese to any dance halls.”

“My impression is that dance halls are neither of use nor ornament,” he said. “Dance halls are not for the good of the locality, seeing that young people attend them from distant places. In our time we had no dance halls, and we managed to grow up all right.”

The judge granted the application.

At Listowel District Court in November 1936, Fr Browne makes yet another appearance, this time alleging that one dance hall proprietor had no care for the “lives and morals” of the attendees. “There were human vultures coming in motor cars to these halls from outside places,” he said, reiterating his hatred of outsiders.

“They sometimes visited more than one hall and after the dance spent their time with servant girls and farmers’ daughters.”

The priest said he “read a report from Liverpool society for prevention of international traffic in women and children, which stated that Irish girls went over to Liverpool, hoping to find work, some with only the clothes they wear. They might as well face the facts that through the dance hall and bar regulations these girls had been made familiar with vice.”

As long as dance halls were given late licences, he said, parents were helpless in preventing this “degradation”.

The pulpit was often used to denounce immoral carryings-on. In February, 1936, Rev John Warren of Waterford Cathedral used his 11am service on a Saturday to highlight an alleged episode at a recent dance.

“I feel bound to mention the dance that took place in my parish very recently, and which gave great scandal to the people of the parish and the city,” he began, explaining that he heard a girl had to be carried from the dance, drunk, to a car.

Lacken Blazers Hunt Club, which had organised the most recent dance in the parish, took exception to the allegation and published a statement in The Irish Times on February 8th, denouncing the claims as rumours without evidence.

Not all of the complaints heard were by priests, and not all were about indecency or threats to the morality of Ireland’s youth.

In September 1936, a group of Ennis householders banded together to stop a dance hall licence because they didn’t like jazz music.

The group’s solicitor “stated emphatically at Ennis Court. . . that the noise of the jazz-band was worse than a Dublin tramway car. He said that there was a certain amount of rhythm in the noise of a tram, to which a person would become accustomed, whereas a jazz-band varied all the time, created much more noise and was more annoying.”

Other common complaints to courts concerned dodgy proprietors trying to make a few pounds using run-down sheds with no facilities. Also, as paraffin became scarce during wartime, the early 1940s saw a clampdown on any wastage, including lighting dance halls.

An overarching theme throughout the complaints was preventing young people drinking too much. To that end, a group of Clonmel priests issued the following three-part, numbered, appeal in October, 1936.

- To all the young men and women of the town, to abstain from attending dances at the rural dance halls some distance from the town.

- To all the young women of the town, to abstain at public social functions, whether for dancing or otherwise, in town or country, from the use of intoxicants of any kind.

- To parents and to people of the town generally, to discountenance by healthy public opinion any disregarding of this appeal made by the priests.