A murder, a moustache and the scourge of Rathfarnham

In 1883, a local ‘terror’ paid an evening visit to an elderly couple’s cottage in Knocklyon 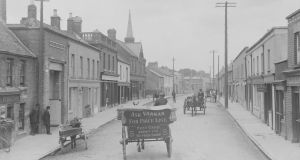 In Rathfarnham, people were terrified of Peter “Garibaldi” Wade.

For years, the 25-year-old had worked a day here and there in manual labour and spent the rest of his time walking the streets, menacing the locals. An Irish Times report branded him “idle, dissolute, without education, a nuisance and, it might be added, a terror to the district in which he lived.”

Rumours connecting him to several unsolved murders endured among the residents of south Dublin. In Knocklyon, one of his favourite haunts, they nicknamed him “Garibaldi”, it was said, out of fear.

At about 7pm on the evening of October 29th, 1883, Wade knocked the door of a cottage rented by an elderly couple, Patrick and Mary Anne Quinn, in Knocklyon. “Garibaldi” would have been quickly recognisable in the doorway. He was about 5 ft 7in tall with brown hair and blue eyes.

His face bore a distinctive moustache and extensive smallpox scarring - a detail which made it into most official notes him, including the prison records which document a one-year stint for larceny he’d recently completed.

Wade’s business that evening, he said, was with Patrick Quinn, a labourer in his 70s, who lived alone with his wife. The couple had no children.

Patrick was a respectable, industrious man “whose only object in life was to earn sufficiently to support his wife and himself.” He had worked for a local man named Byrne and more recently been hired as a gardener by his landlord, Mrs Croker. That night, Wade asked the older man to accompany him out.

“Mr Byrne sent me down for you,” Wade told him.

“I have no notion of going to Mr Byrne tonight when you don’t know him,” Patrick told the visitor, who then began to describe Mr Byrne for the couple; his red whiskers, his stout body and red face. He recalled, accurately, his “red horse” and sidecar.

Mrs Quinn didn’t trust Wade. “I watched his countenance all the time, which was very disagreeable-looking and flushed up,” she later recalled.

But Wade’s description of Byrne was dead-on. Mrs Quinn had spoken with Mr Byrne the previous Sunday, who promised to get in touch soon about gardening work for Patrick. Despite her reservations, she told this to her husband, who finished his tea, put on his coat and left the house.

Mrs Quinn then sat, waiting nervously for her husband’s return. Fifteen minutes after he left, she heard two men chatting just outside the front door. They began talking about shouting and roaring they’d just heard near Beech Park, a large house - and later home of WT Cosgrave - not far from the Quinns’ cottage. “The pressure of the fellow that was with my husband being on my mind,” she recalled, “I went out and asked them where the shouting was.”

Accompanied by neighbour named James Maloney, Mrs Quinn set off in search of her husband. Minutes later, they made a grim discovery at the rear of Beech Park.

Patrick was lying on the ground, badly beaten and “half-throttled to death”. Scratches covered his neck and blood poured from his nose and mouth. A wound under his left eye was bleeding, too. His body was warm; he gave a slight “snore” on being touched, but couldn’t speak.

“I saw there my sorrowful husband, lying in his bleeding gore. He was lying on his side against the hedge, and his arm under him. I pulled out his arm and settled it under him, and he lying bleeding,” said Mrs Quinn.

“There was no appearance of life then. My poor dear man was gone. If I had got one word from him, I would have been contented.”

Patrick died shortly after being found.

The body was carried to Mr Malone’s cottage, pending an inquest. Among the items retrieved from the crime scene was a tuft of facial hair - perhaps a clump of a man’s moustache pulled out during a struggle, posited Sgt William Sandes.

By 8am the following day, Sandes and three constables were in the kitchen of a house in Firhouse, where Wade lay asleep. He was woken up and arrested, with police noting the splatters of blood on his shirt as he pulled it on. Flecks could be seen on his braces, vest and coat.

The infamous Garibaldi, for the first time in nine years, had shaved his moustache, but Mrs Quinn picked him out of a line-up with ease.

The widow approached Wade, and ran her finger along his top lip. “You have taken off your moustache, you infernal murderer!” she shouted, according to an Irish Times report.

The bloodstains and a positive identification by Mrs Quinn were enough for police to charge him with murder. A far as Sandes was concerned, the facial hair found on the ground was unmistakably Wade’s.

Wade was lodged in Kilmainham Jail and tried for murder at Green Street courthouse in Dublin at the winter assizes. It emerged that October 29th had not been Wade’s first visit to the cottage.

The previous Tuesday he had posed as a bailiff, and asked the couple whether they’d been informed that they were to be thrown out of their house for not paying the rent. Patrick had dismissed the talk as nonsense - he always paid up.

In court, Wade openly denied that encounter, telling Mrs Quinn “You would swear anybody’s life away.”

Mr Moss, an analyst for the Crown, examined Wade’s clothes and leaves from the scene, and concluded they were stained with mammalian blood. Several witnesses placed Wade at the scene; one man, Mr McGuinness, testified that he gave him a lend of a razor and witnessed him shaving his moustache late that night.

While at Kilmainham, Wade implicated three other men; Ratigan, McDermott and Gibbons. He swore he had no part in the murder, but played a part in luring Quinn to his death. Fear for his own life motivated him and Gibbons had paid him a half-crown for his help.

The statement, seen as a clear bid by Wade to avoid the death penalty, wasn’t entertained by the court. He was found guilty of murder and sentenced to be hanged at Kilmainham.

The official motive given in the report of outrages that year, as alluded to in some earlier reports, was a dispute over employment. Mr Quinn had recently been hired in place of a third man who was dismissed. Wade, apparently, was carrying out revenge.

After sentencing, Garibaldi came clean, saying he couldn’t “face his God” before setting the record straight. “They know nothing about what happened and had no hand in it,” he said.

As public executions were outlawed in 1868, the hanging took place behind the prison walls. Outside, when the prisoner’s death was confirmed, Mrs Quinn, who had been waiting on the news, shouted in celebration.

“Thank God - thank God! Oh, poor Peter Wade, the murdering villain who murdered my husband - one of the best husbands that ever lived,” she said, according to an Irish Times reporter, who noted that she viewed the black flag being hoisted - a sign of the sentence carried out - with “an expression of satisfaction”.

“I wish you had a good journey,” she said, addressing Wade.

“You got longer time than you gave my poor husband, and you left me a wandering maniac on the world.”

This story is part of the Lost Leads series - a revisiting of lesser-known stories that have made the pages of The Irish Times since 1859. What can you find? Let us know on Twitter: @deanruxton. For more information on subscribing to the archive, see www.irishtimes.com/archive