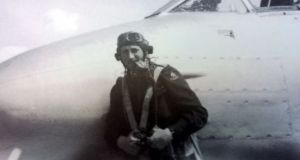 One of the oldest survivors of the second World War and the last surviving member of the Royal Dutch Air Force who attacked and fought the Luftwaffe when Germany invaded the Netherlands in 1940 has died in west Cork.

Major Jan Linzel, who lived in Glengarriff for over 30 years with his wife Marianne, died at St Joseph’s Community Hospital in Castletownbere on Sunday at the age of 103 and will be buried locally in Glengarriff following a funeral s service on Thursday.

Born in the town of Stadskanaal in the province of Gronigen on December 7th 1915, Mr Linzel was always interested in flying and, after joining the Royal Dutch Air Force in May 1938, was attached to a fighter squadron at Ypenburg when Germany declared war on the Netherlands on May 10th 1940.

Three years ago, on the occasion of his 100th birthday, Maj Linzel spoke to The Irish Times and recalled how aged just 24, he and the five other members of his squadron were scrambled and took to the air in their Fokker DXX1 single seat fighters to try and defend the Hague against German bombers.

“I saw the silhouette of an aircraft that I had never seen before... I then saw the German markings and gave a short burst - a very bright violent flame came out of its right engine and then black smoke - it went down straight away,” he recalled.

“I climbed up again and saw a large formation of Heinkels in the direction of the Hague - I dived down to on the hindmost right aircraft and fired everything I had at close range - I am sure I hit it but I did not have time to see the result.

“When I pulled away, a bullet came through the floor and exploded in my thigh - there was a lot of blood and I started to feel faint. I threw off the hood and bailed out - you have no idea how quiet it is when you are hanging in the air.”

Landing in a field of cows, Major Linzel lay there wounded for almost two hours as the local farmer thought he was a German paratrooper but when the farmer finally approached, Major Linzel told him that he was “as Dutch as your cows over there”.

Taken with both Dutch and German wounded to Delft, Major Linzel spent almost six weeks in hospital before he was discharged and after joining the Dutch underground, he managed on his second attempt to make his way via Switzerland, France, Spain and Portugal to Britain where he joined the RAF.

After the war, Major Linzel returned to the Netherlands where he served in the Royal Netherlands Air Force and it was while he was still serving in the air force that he met his future wife, Marianne Nowak while visiting Essen in the Ruhr in June 1958 and three months later they married.

Marianne had grown up hearing stories about Ireland from her grandfather who had worked on the Ardnacrusha Dam in the 1920s and the couple and their teenage son, Otto started coming on holidays to Glengarriff in 1973 and five years later they moved there permanently.

In 2015, the Royal Netherlands Air Force honoured Major Linzel by chartering a plane to fly him back to the Netherlands for a ceremony to mark the 75th anniversary of the German invasion while later in 2015, the local community in Glengarriff marked his 100th birthday with a party.

Major Linzel is survived by his wife, Marianne, son Otto and his wider family. His funeral takes place at Sacred Heart Church Glengarriff at 11am on Thursday.