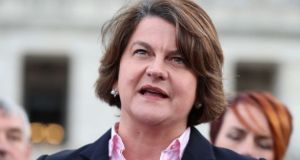 The RHI scheme was launched in November 2012, when DUP leader Arlene Foster was minister for enterprise, trade and investment. File image: PA

A legal expert has said that if some payments from Northern Ireland’s ill-fated renewable heat incentive are found to be unauthorised under EU rules, the money will have to be clawed back like a “hard-nosed creditor”.

The RHI scheme was designed to encourage businesses to switch from burning fossil fuels to more sustainable alternatives like wood biomass.

The European Commission made clear that state aid approval for the scheme “is based on a 12 per cent rate of return rather than the associated tariff levels”, and tariffs have since been reduced from the original rate set in 2012.

However if previous payments under the so-called “cash for ash” scheme are found to be unauthorised state aid, all the money paid out will have to be retrieved, according to George Peretz QC, from Monckton Chambers.

He told the Northern Ireland affairs committee of the UK parliament on Tuesday: “The general rule is that when a unlawful aid is granted... there has to be recovery of the aid from the beneficiaries.

“The European court has made that clear over the last decades, that obligation to recover overrides national rules, and that member states can’t refuse to recover aid simply because it creates a danger of insolvency.

“It needs to take the attitude of a hard-nosed creditor, determined to get its money back if at all possible. You take up a hard-nosed commercial attitude to recovery, and that’s a strict obligation.

“The legal issue is to whether there actually has been overpayment, i.e., a payment outside the scope of the decision, because that depends on one’s view of what the 2012 decision actually was and means.

“That’s a legal issue on which two views could be taken if recovery was ever sought, and I’m sure lawyers representing the beneficiaries would be wanting to argue that as far as they could possibly do so.”

A number of committee members asked about a possible hardship scheme to help those who would have to pay back the money made from RHI with interest.

It was noted that many of those involved are farmers or small rural businesses, and may no longer have the money.

Mr Peretz said it was unlikely that such a hardship fund could be established.

“There are strings of cases that go on to say, unsurprisingly, it’s entirely impossible for a member state, under their own law, to say you can sue the member state and get the money back in damages.

“That’s effectively giving you back the aid you should never have got in the first place.

“The basic principle is that the state should get the money back and not come up with clever ways to get it back again.”

Mr Peretz added that those involved may be able to retrieve some money for additional costs such as legal fees or other obligations that resulted from the payments.

The RHI scheme was launched in November 2012, when DUP leader Arlene Foster was minister for enterprise, trade and investment. Controversy surrounding it led to the collapse of Northern Ireland’s devolved government in January 2017, and was the subject of a lengthy public inquiry.