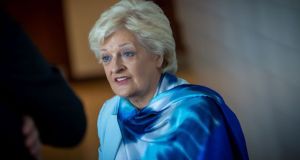 General secretary of the Irish Congress of Trade Unions Patricia King said it had been agreed that management would undertake to progress matters on pay. File photograph: Dylan Vaughan

Staff in State-funded voluntary organisations that provide health and social services are to ballot for industrial action over pay restoration.

Trade unions representing workers in what are known as Section 39 bodies decided in principle on Thursday that a vote on industrial action would be held.

The unions will meet again next week to decide which particular agencies will be involved in the planned ballot.

Unions suggested any industrial action could be focussed on Cork with a view to putting pressure on the Taoiseach Micheál Martin who supported the cause of the Section 39 workers when in opposition.

The move follows what unions have described as an “unsatisfactory” meeting over the pay restoration issue with health service management earlier this week.

Unions argue that while Section 39 organisations were urged to cut staff pay in line with reductions in remuneration to public servants during the austerity years, Section 39 personnel involved have not seen pay restoration, unlike direct State employees.

Siptu public administration and community divisional organiser, Adrian Kane said that over the coming day the union would “map out critical pinch points for any potential industrial action with a particular focus on Cork and the surrounding areas where our members have been extremely active and vocal in their determination to secure pay justice”.

Fórsa assistant general secretary Catherine Keogh said: “It is neither realistic nor fair to expect Section 39 workers to show up to work every day and attend to the challenges of delivering vital services during a global pandemic, while at the same time denying them the modest pay restoration that should have been implemented months ago.”

Mr Kane said “Siptu members in places like Co-Action, South Doc, Enable Ireland and a wide range of home help providers had public sector-style pay cuts foisted upon them during the austerity years and when these savage cuts where being rightly restored across the public service, these essential workers were left out in the cold”.

“These same members are hoping that now the leader of Fianna Fail Michael Martin is in the position of Taoiseach that he will continue to be as vociferous in his support for these workers.”

In a letter to Minister for Public Expenditure Michael McGrath on Thursday seeking a meeting, general secretary of the Irish Congress of Trade Unions Patricia King said it had been agreed in the summer that the management side would undertake to progress matters including working to secure agreement from the Department of Public Expenditure that settlement proposals could be developed.

“However at a further meeting this week it was apparent that little or no work had been done in the intervening period. It now seems clear to the union that an agreement cannot be reached on this issue unless your department agrees that money will be made available to settle this dispute.”

In a statement earlier this week the Department of Health said it “remains committed to the WRC process in relation to pay restoration for the remaining Section 39 bodies2.

“The HSE are currently carrying out a detailed costing exercise in this regard. The Department have been liaising with the Department of Public Expenditure and Reform on this and consultation will take place when the full details of the costs are available.”