Facilities will not be in place ‘despite monumental efforts’ by January 1st, committee hears 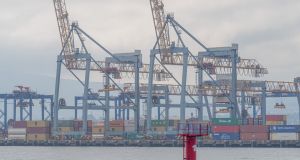 The Stormont scrutiny committee was told that contingency plans needed to be ‘immediately developed and implemented’. Photograph: iStock

New facilities required to check goods arriving at Northern Ireland’s ports from Great Britain will not be ready in time for the end of the Brexit transition period, a senior civil servant has warned.

The permanent secretary at the North’s Department of Agriculture, Denis McMahon, told the Stormont scrutiny committee on Thursday that “despite monumental efforts by the team, not everything will be in place by January 1st, 2021”.

Work is underway to put the necessary facilities, personnel and IT systems in place to carry out the additional SPS (sanitary and phytosanitary) checks on plant and live animal imports which will be required from January 1st, but Mr McMahon said contingency plans needed to be “immediately developed and implemented”.

The short time-frame, he said, made the deadline “almost impossible” and significant issues remained to be addressed, not least the lack of clarity regarding the outcome of the negotiations on a potential trade deal between the EU and the UK and the level of checks that will be required.

Under the terms of the Northern Ireland protocol, which is part of the Brexit withdrawal agreement, Northern Ireland will remain in the EU Single Market for goods when the transition period ends, and will therefore require additional regulatory checks for plant and live animal products arriving from Great Britain.

“A supermarket lorry travelling today without any facilitations could have some 400 products which would need to be certified on it. In that context, we can implement what we like, but without help from the UK and the EU to simplify the processes involved, we will not be able to deliver the level of frictionless trade that we have today,” he said.

He said he and his colleagues had been placed in an “impossible position” as they were legally required to oversee work on the new facilities at ports and airports, but the minister, the DUP MLA Edwin Poots, was opposed to it.

“The minister is opposed for political reasons to what we’re doing, and also has some legitimate concerns about the operational issues as well,” he said.

Mr Poots is against any new infrastructure at ports and airports because it places an additional barrier between Northern Ireland and Great Britain, but this week acknowledged that its construction is a legal requirement.

“We now need the UK government, with the EU, to help us make this work for the benefit of everyone who lives and works in Northern Ireland,” Mr McMahon said.

Separately on Thursday the North’s Chief Constable, Simon Byrne, warned that £4.5 million is needed by the Police Service of Northern Ireland (PSNI) to “balance the books for the commitment to fund officers to police the Brexit challenge.”

Giving evidence to the Stormont Justice Committee regarding Brexit preparedness, Mr Byrne said he envisaged nearly 200 neighbourhood police officers - who have been recruited through the UK government’s EU exit funding – “playing a crucial role, particularly in the Border areas, to bring normality to communities” post-Brexit.

“Criminals will exploit any gaps, in the opportunity to raise money – differences in tariffs, differences in the Common Travel Area – we are alert to them, they could be exploited,” he said.

He also said police had “focused more effort on the haulage industry and are proposing to invest different operational teams to see can we step up in relation to policing of hauliers and increasing the policing of the road network to make sure we learn some of the lessons of the last 12 months, and where we can use intelligence to intercept, interdict and put criminals on the back foot.”

Asked about contingency planning for a no-deal Brexit, Mr Byrne said it was “important to set a tone that whilst some of the resolutions that we are seeing and hearing about may be suboptimal, I think there’s increasing confidence there will be workarounds if we have to go to that space.”

Citing examples such as the exchange of information between police forces and the use of European Arrest Warrants, he said “things may be slower, there may be delays, which are frustrating for everybody in 2021, but I think there is commitment to see that we make it as effective as possible.”

Assistant Chief Constable Mark McEwen said scenario planning was underway regarding what might happen in early January, which included whether or not there may be “some disruption and some small levels of protest”.

“We have been planning with our partners to ensure that we have the right resources in the right place to deal with that and to assist the community and minimise disruption,” he said.

However he said it was the police’s assessment “that even in a non-negotiated outcome we won’t see a huge impact in the immediate aftermath, in the early stages of January.”

He also said while they enjoyed close relations with An Garda Síochána and had influenced engagements around EU withdrawal at a UK-wide level, there had been “certain issues around clarity and some political sensitivities around direct negotiations” with the Republic of Ireland.

“There have been around our ongoing transfer of information and other matters in the justice and home affairs side of things,” he said, adding that “those conversations have stepped up, we have very strong relationships.”

The Chief Constable also said the PSNI was considering whether there were “opportunities to go back into” some former police stations along the Border which had been for sale but which were subsequently taken off the market due to Brexit.

In this scenario, he said, police would “not do it as us in isolation . . . so that rather than just seeing it as a police station we see it as a community safety base.” – Additional reporting PA.