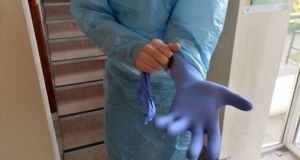 An additional €415 million is needed for buying PPE for the rest of this year. File photograph: Alan Betson

The Health Service Executive expects to spend more than €1.5 billion on personal protective equipment against Covid-19 between now and the end of next year, according to its winter plan.

An additional €415 million is needed for the rest of this year, and a further €1.155 billion next year, although the HSE is hoping for some price reductions “as markets soften”.

The plan, which was launched in Dublin on Thursday, envisages the recruitment of an additional 12,500 staff.

Over 570 new hospital beds will also be provided under the plan.

With further waves of virus infection forecast, the plan predicts this will be “the most challenging winter in living memory” for the health service.

A total of 4.76 million additional home support hours above existing levels are to be provided by next April, at a cost of €138 million.

Under the plan, the number of community assessment hubs is being increased from seven to 20 by March.

Other objectives include a 30 per cent reduction in trolley numbers, quicker treatment of patients in emergency department, the completion of over 20,000 additional elective procedures and a ceiling of 450 delayed transfers of care for patients who are well enough to be discharged from hospital.

Under an arrangement still being negotiated with private hospitals, it is envisaged the HSE will have access to their capacity in the event of a surge in Covid-19 cases.

There will also be access to private hospital capacity to address the provision of ongoing care by the HSE, as well as the provision of elective care for public patients experiencing delays given the growth in waiting lists.

Planned additional bed capacity includes 251 acute beds and 89 sub-acute beds this year and an additional 232 acute beds in the first three months of next year.

The Irish Medical Organisation expressed disappointment with the plan given the challenges posed by Covid-19. The Irish Hospital Consultants Association and the Irish Nurses and Midwives Organisation queried the lack of detail around staff for the new beds promised.

Minister for Health Stephen Donnelly, who was due to launch the plan, is unwell and did not attend.

Minister of State for mental health and older people Mary Butler said the investment of over €600 million in the winter plan showed how seriously the Government took the challenges ahead.

Ms Butler, who had a speaking engagement in the Seanad, left after her speech without taking questions from reporters.