Covid-19: Ireland has a concerning trend for virus, says ECDC 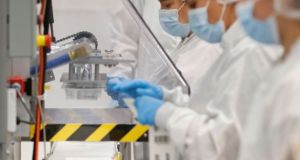 The risk to vulnerable people is very high, because of the difficulty of shielding them as transmission levels rise, the report says.

Ireland has a “concerning trend” for Covid-19, though the overall risk to the population from the virus remains moderate, according to the latest report from the European Centre for Disease Control (ECDC).

As interventions to stop the spread of the virus have not been effective in limiting big increases in infection, the overall probability of infection here is very high, it says.

Sustained increases in cases (over 10 per cent) have been seen this month in Ireland and 12 other European countries, according to the ECDC’s risk assessment. However, since severe Covid-19 and death is more common among vulnerable individuals and these groups are less affected than other groups, the impact of the disease is still low, the report says. This gives an overall moderate risk of Covid-19 for the general population and for healthcare provision.

It categorises the countries with concerning trends into two groups. The first, which includes Ireland, are countries where high and increasing infections are reported due to high testing rates, and cases mostly involved young people, with a low proportion of severe cases.

In these countries, the risk to vulnerable is very high, because of the difficulty of shielding them as transmission levels rise.

Easy access to testing and timeliness of testing is critical for the effectiveness of measures such as contact tracing and isolation of cases, the report says.

Rapid identification, testing regardless of symptoms, and quarantine of high-risk contacts remains one of the most effective measures to reduce transmission. ECDC says people in high-risk settings such as nursing homes should be tested regardless of symptoms, and it recommends a 14-day isolation for people who have had contact with confirmed cases, reducible to 10 if a test at day 10 is negative.

“In some member states the situation is now even worse than during the peak in March. This is a real cause for concern. What this means to be very clear is that the control measures taken have simply not been effective enough, or not been enforced, or not followed as they should have been,” said Stella Kyriakides, European commissioner for health and food safety.

“We are starting to see an increase in the occupancy of ICU. We cannot lower our guard. This crisis is not behind us,” she said. “It might be our last chance to prevent a repeat of last spring.”

The commissioner spoke at a joint press conference with the director of the European Centre for Disease Prevention and Control as the health body released a new report that showed an upsurge in infections, particularly in France, Spain and parts of Belgium and the Netherlands.

“We are currently seeing a worrying increase in the number of Covid-19 cases detected in Europe, ” said ECDC director Andrea Ammon. “The pandemic is far from over and we must not drop our guard.”

The ECDC director warned that a large proportion of new cases and almost half of severe cases seen in the last month were among young people, and appealed to governments to communicate the risks to younger age groups.

“A large number of cases right now are among younger people which comprises the age group between 15 and 49,” Dr Ammon said.