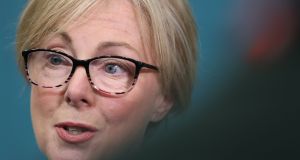 Speaking out and standing up for what you believe in, particularly if you are a woman in politics, can be very bruising, Minister for Social Protection Regina Doherty has said. Photograph: Nick Bradshaw/The Irish Times.

Speaking out and standing up for what you believe in, particularly if you are a woman in politics, can be very bruising, Minister for Social Protection Regina Doherty has said.

Addressing a Dublin conference entitled Celebrating Women Leaders in Ireland, the Minister said as a woman and a politician she had faced “jibes and nasty comments” which were largely unexpected.

Ms Doherty said she believed she was a strong person and had arrived in Leinster house feeling “invincible” after being elected and determined to contribute.

However, she said she was shocked at the “sarcastic remarks and plain old nasty, dirty, deliberate jibes that come at you”.

She said the natural reaction was for a politician to steel themselves against the personal nature of such abuse, but there was a concurrent danger of dehumanising oneself when making decisions that affect people’s lives.

Ms Doherty also said the early years of the State had shown a significant under representation of women in the Dáil. She said during the War of Independence there were more then 600 branches of Cumann na mBan the women’s paramilitary association, but by the second Dáil there were just six women TDs.

Dr Leeann Lane, from DCU, reflected on the legacy of Constance Markievicz for the next generation of pioneering women.

Minister for Business Heather Humphreys, who sent her regrets at being unable to attend the conference in person, announced a postgraduate scholarship from her department, in partnership with the Irish Research Council, which will honour the legacy of Countess Markievicz .

The scholarship is for a PhD fellowship at any eligible higher education institution in Ireland and the Irish Research Council will make a call for applications in early next year.