A criminal in his 40s linked to at least one murder, he was reported missing by his partner 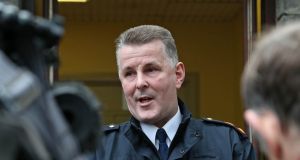 Superintendent Paul Dolan of Lucan Garda station speaking during a media briefing about the body of a man found in a burning car in Lucan. Photograph: Collins

The man shot dead in a vehicle before it was set on fire with his remains inside in Lucan on Monday night was involved in drug trafficking and was also implicated in murder.

Wayne Whelan, a criminal in his 40s who lived in the west Dublin area, had been reported missing by his partner on Monday.

The official identification process has become protracted because the body was so badly burned but it is understood Whelan is the same man whose remains were found in the car.

The dead man’s dental records and DNA were being used on Wednesday to give positive confirmation.

Whelan, a drug dealer who has been linked to at least one murder and possibly two, was shot before the car with his body inside was set on fire at Mount Andrew Rise, just before 8pm.

Supt Paul Dolan of Lucan Garda station said while detectives were pursuing a definite line of inquiry he would not be drawn on details of the murder investigation.

Supt Dolan said the burnt-out car, a navy Toyota Corolla registration number 05 C W2225, was bought on November 13th. He appealed to anybody who saw it on Monday or at any time over the past week to contact gardaí.

Sources told The Irish Times the vehicle was moved around a number of times and parked for periods in several locations close to the murder scene in the hours before the killing.

Whelan had been active in the Dublin drugs scene for many years and gardaí believe he was trafficking drugs into the Republic.

Lynch (42) was involved in money laundering linked to the drugs trade and he was a very close associate of Whelan.

Lynch, who was investigated by the Criminal Assets Bureau, was gunned down on Friday, March 1st, outside his home in Foxdene.

Whelanwas shot and wounded several times a number of months ago in a botched murder bid. At the time gardaí suspected that attempt on his life may have been a revenge shooting for the murder of Lynch.

Both Whelan and Lynch were associates of Mark Desmond, a Ballyfermot criminal nicknamed ‘The Guinea Pig’.

Desmond, a drug dealer and murderer, was himself shot dead, aged 41 years, at Griffeen Valley Park, Lucan, in December 2016.

Gardaí believe at the time of his murder he was staying in a property close to the park with Whelan.

One line of inquiry into the Desmond gun killing was that Whelan effectively set him up, working with Desmond’s killers to ensure he was in the park at the time he was shot dead.