Sustainable farming: ‘You need to keep what’s good about nature’ 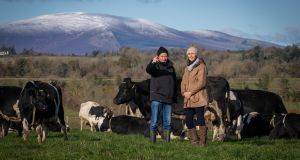 Waterford farmer Kieran Hearne has been farming in the shadow of the Comeragh mountains near Rathgormack village since he took over the running of the land from his late father in 1993.

“Every generation [leaves] its own marking on the land,” he says. “This generation needs to make it even better because we’ve realised you need to keep it there. You need to keep what’s good about nature there on the farm.”

Hearne is the overall winner of the 2019 National Dairy Council & Kerrygold Quality Milk Awards, which are designed to recognise sustainable farming practise.

Despite farmers’ anger that they are “farm-shamed”, or blamed for excessive CO2 emissions, the National Dairy Council (NDC) says farmers must be educated on actions which can be taken to better protect the environment.

One of the solutions is hedges. Rather than “expansive, prairie-like” fields, the Hearne farm has multiple hedgerows, all of them linked. “For dairy cows, we have ditches that can give them good shelter on a cold day,” Mr Hearne says.

“We also look after ditches in such a way that they’re good for wildlife. We don’t want to over-trim them so we trim every second or third year,” he tells The Irish Times on a visit to his farm.

Farmers can also help matters by spreading slurry better. “The typical slurry spreader hits off a splash-plate at the back of a tanker and so it lands back on the grass like a fountain,” says Dungarvan-based Teagasc official, Séamus Kearney, who has advised Hearne on farming practices for the past 20 years.

“But you are getting some loss of gases into the environment, whereas the low-emission slurry spreader actually dribbles [the slurry] out through little pipes and puts it straight onto the soil so that there’s no fountain effect.”

There is also a need to limit growth. Since he took over the family farm, Hearne has grown the herd to nearly 190. The number, says Kearney, is the “sweet spot” for Hearn’s 200-acre farm, one that is sustainable economically, with little need to grow further.

Every farmer is going to have think green, says NDC chief executive Zoe Kavanagh, as “the consumer is acutely aware about climate change”.

“While they believe in a sustainable Irish dairy sector, three-quarters are saying that they have no idea what we’re doing. That just indicates the communication that needs to be done.”

Currently, just one in 10 consumers take a product’s carbon footprint into consideration when making a purchase but Kavanagh believes this figure will rise, and quickly: “Carbon footprint is going to become a bigger influence in the household shop.

“I think dairy has a big opportunity to influence that. The consumer is thinking about their shop – what’s local, what’s fresh, what’s culturally appropriate to be putting in my basket in Ireland. ”

Citing data from the Sustainable Energy Authority of Ireland which shows that agriculture made up a third of Ireland’s overall greenhouse gas emissions in 2017, she says Irish dairy has tried to identify opportunities to be more sustainable.

However, it has “pretty much talked to itself”, she says, stressing the need to build trust with future consumers. “What’s clear now is we have a young questioning consumer who cares about climate change and who does not understand what dairy is doing.”