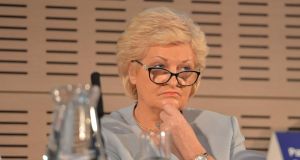 Ictu general secretary Patricia King said Bord na Móna is determined to get all unions out of the company. Photograph: Alan Betson

Bord na Móna (BNM) has been castigated by the Irish Congress of Trade Unions (Ictu) for failing to ensure hundreds of its workers are properly looked after as the company stops peat-cutting in the midlands.

Appearing before the Oireachtas Committee on Climate Action, Ictu general secretary Patricia King said the company is determined to get all unions out of the organisation.

BNM in 2018 employed 2,000 people directly and another 2,000 indirectly, though 500 of the directly-employed staff will be gone by the end of the year, the Oireachtas committee was told.

Calling for proper management/union talks, the Ictu leader said BNM had flatly refused to establish a stakeholder forum under the auspices of the Workplace Relations Commission even though it is State-owned.

She rejected management’s references to the company’s joint industrial council, as this deals only with day-to-day issues, “and has no relevance whatsoever” in the current reorganisation plan.

“Redundancies do not solve the problem, it’s about protecting decent work, not providing replacement jobs with indecent conditions,” she told TDs. Meanwhile, the company’s pension fund has not served the workers well.

Minister for Climate Action and Environment Richard Bruton needed to get the WRC involved urgently but she believed that “very senior people in BNM have decided: ‘We’re not doing this, and that’s it.’

“The phasing out of peat production also has implications for the ESB, and the decision to close peat-fired stations by December 2020 has added to the fear and uncertainty for workers in the region.

“The prospect of a planned, orderly wind-down is now seriously diminished and the Midlands is threatened by further economic decline,” Ms King said.

A coherent just transition framework would address the real fears of workers and their communities on the impact of the shift to greener energy production, she said.

“Workers and communities across the energy generation sector are being asked to sacrifice their livelihoods for the greater good of future generations. That creates a moral and social imperative for policymakers to ensure they do not become the collateral damage of decisions taken at a distant remove.”

If workers and their communities were abandoned to the market, then support for the process will evaporate and opposition will grow, she warned.

In a separate hearing, BNM chief executive Tom Donnellan insisted it had a just transition plan for workers that included redeployment and options to leave that “avoids compulsory redundancy”. It was party of a regional transition forum, which involved all parties and was working well.

It was investing more than €1.6 billion in renewable energy; recycling, new green business and redeployment in bog restoration in a project of international significance in carbon capture and boosting biodiversity over the coming decade.

Its pension schemes were well funded, he confirmed. The company, which was the biggest coal distributor in the country, is getting out of that business and reinvesting resulting funds in BNM. It expected peat briquettes would continue to be used for some time as 20 per cent of households burn solid fuel; at least until carbon taxes prompted a market shift.