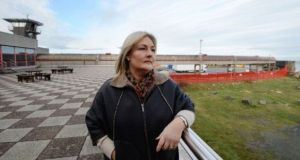 Minister for Justice Charlie Flanagan has renewed his criticism in the Dáil of remarks by Fine Gael Wexford byelection candidate Verona Murphy about migrants and “categorically dissociated” himself from them.

Mr Flanagan was speaking as he confirmed he will bring forward proposals for legislation on hate crime in the new year.

During justice question time in the Dáil on Wednesday, Fianna Fáil justice spokesman Jim O’Callaghan highlighted the delay in updating incitement to hatred legislation after successive ministers for justice since 2000 had pledged to review the laws.

He said that politicians in particular needed to be reminded that under the current legislation “it is a criminal offence to publish written material that is threatening, abusive or insulting and intended or likely to stir up hatred against groups because of their race, group, colour, religion or national original”.

He told Mr Flanagan that it “should be brought to the attention of particular people in your own party because of their utterances in recent times”.

Mr Flanagan replied: “I want to categorically dissociate myself from comments made by Ms Verona Murphy, our own party candidate in Wexford”.

He added that “it’s incumbent on all of us to ensure that unacceptable commentary is treated as such”.

The Minister said he was sure Mr O’Callaghan would dissociate himself from comments “in respect of his own party candidate in another part of the country”.

But the Fianna Fáil TD said: “I am not aware of any utterances by any Fianna Fáil candidate, as a candidate, in terms of making statements that could offend or incite hatred”.

Ms Murphy has been embroiled in controversy and apologised for comments she made about migrants including remarks that children as young as three could have been “manipulated” by Isis.

She also apologised for saying that Isis was a “big part” of the migrant population in Ireland and that some asylum seekers may need to be “re-programmed”.

Mr O’Callaghan had warned that race hate was a wider national and European issue. He said “we need to challenge these utterances. We need to be very severe about it”.

The Minister highlighted actions underway including the planned establishment of an anti-racism committee “which will have a mandate to examine what public sector bodies as well as wider communities need to challenge head-on” in respect of racism in Ireland.

Mr Flanagan said research was being finalised on how other jurisdictions approach hate crime and he would bring forward proposals for new legislation in the new year.

A consultation process on the separate issue of incitement to hatred remains open until December 13th “to get views on how to deal with those who actively seek to encourage and spread hatred against minority groups”.