‘We have been pushed into the same protests as the nurses’: beef farmers take to the streets 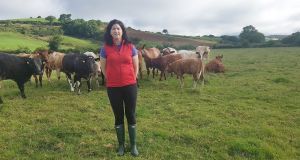 Beef farmer Helen O’Sullivan is no stranger to early starts, but at 5am on Wednesday she will be heading with fellow west Cork farmers, not for the fields, but to a protest outside Leinster House. Battered by the looming threat of Brexit and the dominance of the meat factories at home, beef farmers are now facing dangers from the proposed Mercosur trade deal.

Farmers had more income 20 years ago than now, she says: “You could buy your pallet of fertiliser for maybe a quarter of the price of what it is now. The cost of production has soared, but the prices have dropped”.

O’Sullivan, from Droumsullivan, Bantry, was introduced to farming in 1983 at the age of five, when her mother and her late father bought the land that she says is her pride and joy.

Up until last year she worked full time on the farm alongside her mother, Mary. Today, she still manages long hours on the farm, while working part-time with the West Cork Development Partnership.

Like many other beef farmers, the 41-year-old says, she has had to find outside income to keep the farm going. “The people I work with are fantastic. They are really flexible. There is often a morning that I am out calving and they say, ‘Come in another morning.’ If money wasn’t an issue, I would farm 24/7. I absolutely love farming.”

Take to the streets

Farmers should learn from the water-charge protestors, she believes, arguing they must be prepared to take to the streets, and to stay there to force someone to listen.

She wonders how beef farmers are expected to survive when the customer pays €10 for beef in the shops, the retailer gets €5.10 for three days’ work handling the meat, the processor gets €2.90 and farmers earn just €2 for two years’ work raising the animal.

Though some argue farmers are crying wolf about the threat posed by Mercosur, O’Sullivan insists it will be “the final nail in the coffin” for beef farmers if it finally gets approval.

“We cannot compete with South American beef. It is not a level playing pitch. They can produce their beef at €2.17 a kg while it costs us roughly €5.28 a kg,” she told The Irish Times.

“We have the best beef in the world, but yet they are hoping to import 99 thousand tonnes of unregulated cheap meat in to this country. We won’t know what we are eating.”

Criticising Ireland’s EU Commissioner for Agriculture, Phil Hogan for “hypocrisy”, she says the Kilkenny man is constantly putting pressure on farmers to cut down on production and grow trees.

“Here he is wanting to bring in cattle from half ways across the world and cutting down the rainforest. How more hypocritical can you get? The Amazon rainforests are the world’s lungs. What about carbon emissions and the carbon footprint?”

Lots of things have driven farmers onto Molesworth Street in Dublin outside Leinster House on Wednesday morning: “We have been pushed now to do the same protests as the doctors and nurses. This hasn’t happened overnight. This has been going on for 15 to 20 years.”