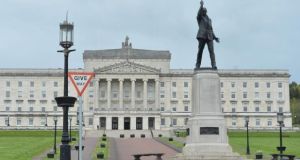 MPs at Westminster have voted overwhelmingly to extend same-sex marriage and abortion rights to Northern Ireland if the Stormont institutions are not restored.

They voted by 383 to 73, a majority of 310, to introduce same-sex marriage by October 21st unless power-sharing talks lead to the restoration of the Assembly and the Executive before then.

They voted by 332 to 99, a majority of 233, to implement a United Nations report that said the lack of abortion rights was a violation of the human rights of women in Northern Ireland.

Northern Ireland minister John Penrose said the government would act on both votes but warned that the first same-sex weddings might not take place immediately after October 21st because of necessary changes to rules on matters such as pensions and the conversion of civil partnerships. He said the implementation of the abortion amendment would need to ensure that it would not have an impact of abortion law elsewhere in the UK.

Labour’s Conor McGinn, who tabled the marriage equality amendment, said that by delaying full civil rights to LGBT people in Northern Ireland Westminster had denied them.

MPs at Westminster have voted overwhelmingly to extend same-sex marriage and abortion rights to Northern Ireland.

“It failed people in Northern Ireland by not extending same-sex marriage when it became the law here, making people in NI less valued than the rest of us. Tonight we have a chance to do the right thing,” he told MPs before the vote.

DUP deputy leader Nigel Dodds said it was “fundamentally wrong” for Westminster to legislate for issues such as marriage and reproductive rights which are devolved to the Northern Ireland Assembly. And he warned that Mr McGinn’s amendment could act as a disincentive to Sinn Féin to restore the Stormont institutions before marriage equality is introduced on October 21st.

“It is not right that we should drive a coach and horses through the devolution settlement in relation to certain issues which people feel passionately and deeply about here but which are the subject of devolved powers in Northern Ireland and at a time when there are real prospects of discussions taking place among the political parties leading to an agreement for the restoration of devolution. The effect of taking decisions before agreements are reached is to skew those negotiations,” he said.

Mr McGinn said Westminster was not usurping the role of the Assembly but acting on the mandate it gave when it voted for marriage equality before the DUP used a petition of concern to block its implementation.

The amendments’ success was assured when the government offered its MPs a free vote on the issues of LGBT and abortion rights and the Scottish National Party (SNP) changed its position overnight to support them.

On Monday, the SNP said it could not support any move that allowed Westminster to legislate on a devolved matter in any part of the United Kingdom. After an internal rebellion, the party said on Tuesday it would support the amendments because they were on human rights issues but about half of the party’s MPs abstained in both votes.

Conservative Nick Herbert said there was a precedent for the action in Westminster’s extension of civil partnerships to Northern Ireland when the Assembly was suspended in 2004. He said Northern Ireland had shown its consent for marriage equality both in votes in the Assembly and in opinion polls, one of which recently showed 76 per cent support for it.