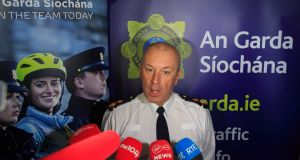 Three per cent of garda fraud investigations relate to bogus or exaggerated insurance claims, an Oireachtas Committee has heard.

Deputy commissioner John Twomey broke down the activity of the Garda National Economic Crime Bureau, saying it had about 50 live insurance investigations since last October, out of a total caseload of approximately 1,500.

The figures were given to the Oireachtas Finance Committee examining fraud activity in the sector.

A specialist fraud unit within An Garda Síochána has already been firmly ruled out on the basis of the model proposed where the industry would offer some kind of funding.

Although deputy commissioner Twomey said that was an “ethical issue”, he also said in his opening remarks that “discussions have commenced with the Department of Justice on possible opportunities where the insurance industry may be asked to provide financial support in areas that could assist insurance fraud investigations such as IT software, training, and analysis”.

Mr Doherty objected that this amounted to a different version of the same thing, prompting the deputy commissioner to clarify that he was referring to the transfer of data by insurance companies to gardaí in a manner that would carry cost implications.

In response to questions by Fianna Fail finance spokesman Michael McGrath, Deputy Commissioner Twomey confirmed there were a number of active investigations in the area of “fraud tourism” whereby people came into the country with the intent of scamming the system by faking crashes.

He also said he would provide the committee with a breakdown of prosecutions, adding: “Absolutely, there have been convictions in relation to insurance fraud, absolutely”.

An increase in the number of personal injury claimants seeking money for “home help” supports is further driving up the price of insurance costs, FBD Insurance told the committee.

Such claims - which include getting someone in to clean or to help with gardening jobs - began to emerge outside of very serious injury cases in the last four to five years, the company’s chief claims officer Jackie McMahon said.

In one FBD case a man with an uncontested back injury claimed over €1 million - more than €700,000 of which was related to home help and other assistance. Ultimately, the company paid out €150,000.

“We used to see that only in the most serious cases,” he said, of those that would not be disputed. “Now it’s much more a feature in more moderate injuries.”

Mr McMahon claimed “a certain cohort of solicitors” were involved in “this case building”.

Mr McMahon said another relatively recent phenomenon was the rising level of psychological trauma claims being attached to cases of soft tissue damage, often where there is no evidence of any lasting or serious physical damage.

Today, he said, this occurs in 30 to 40 per cent of cases, often doubling the associated costs.