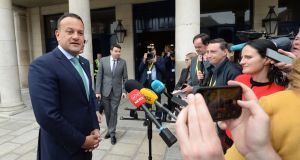 Taoiseach Leo Varadkar has defended Minister of State for Defence Paul Kehoe and refused to call for him to withdraw “inaccurate” claims about the docking of Naval Service vessels.

The Taoiseach acknowledged that while the maintenance on the vessels would be completed by mid-October “with current staffing levels it is unlikely they can be brought back into service”.

Sinn Féin leader Mary Lou McDonald asked the Taoiseach, who is Minister for Defence, if he would request his Minister of State to withdraw his “inaccurate claims” which “directly contradicted” the concerns of Naval Service commander Commodore Michael Malone.

She said Cmder Malone had written in the Defence Force newsletter in June that 540 personnel had left the service in the past five years and because of the shortage in personnel “he had taken the decision to place two ships in an operational reserve capacity”.

But defending Mr Kehoe the Taoiseach said the Minister got his information at a briefing on Friday also attended by the Flag Officer at headquarters in Haulbowline, Co Cork and “the Defence Forces press office confirmed only last night that two vessels - LÉ (Long Eireannach - Irish Ship) Eithne and LÉ Orla - are going into planned maintenance”.

Ms McDonald said the Taoiseach had agreed with the Commodore and contradicted the Minister.

But Mr Varadkar, who insisted there was no division between him and Mr Kehoe, said planning was not the only issue. He said the Government including Mr Kehoe had acknowledged staff shortages in the Naval Service.

“It has a complement of 1,094 personnel but it currently has just 934 personnel,” Mr Varadkar said.

He said that because it is understaffed “there is going to be a change of practice. Where boats are put into maintenance or into reserve, the crews will then be redeployed to vessels that are in service.”

He said that of the nine vessels in the service, “LÉ Róisín is going through a mid-life refit and will not be available for service until the end of the year. LÉ Eithne and LÉ Orla are going through planned maintenance as the Minister said said and that was confirmed by the press office of the Defence Forces last night,” and they would be out of service until end of September and mid-October but with current staffing levels “it is unlikely they can be brought back into service”.

He said the difference was that crews are now being redeployed to the other vessels to ensure they are fully crewed and staffed.

“It is better to have a small number of ships fully staffed and I support the decision of the flag officer in that regard.”

And he said “the Naval Service will not be able to return to the Mediterranean because we must instead focus on our own seas, fishery protection and drug interdiction”.

He said they would continue to recruit and make efforts to retain the staff “with a view to putting a seventh vessel back in service later in the year, if possible”.