‘I received letters, phone calls that were absolutely derogatory’ 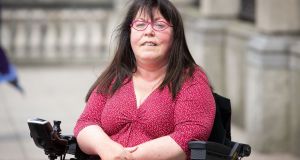 Rosaleen McDonagh ran for the Seanad in 2002 and 2007. Photograph: Tom Honan/The Irish Times

A former Seanad candidate has described the “absolutely derogatory” abuse she received when she put herself forward for election.

Traveller activist and playwright Rosaleen McDonagh, who unsuccessfully ran for the Seanad in 2002 and 2007, described the reaction to her candidacy each time as “very hostile”.

“I received letters, phone calls that were absolutely derogatory about my gender, my ethnicity and my disability.” She felt hugely isolated and without any support from the Oireachtas. Despite this, she found the experience of running fruitful and she “learned a lot.”

Ms McDonagh was speaking at a Seanad committee looking at how to increase Traveller participation in politics. Citing senator Lynn Ruane as a “real working class woman” she said her voice had enriched Irish political debate and the time for Traveller voices in national politics was “now”.

Co-director of Pavee Point Martin Collins, also addressing the Seanad public consultation committee, said ethnicity quotas in elections and a “Traveller seat” in the Seanad were “tried and tested” measures elsewhere in Europe to increase indigenous minorities’ participation in politics.

“We do need to look at affirmative action policies. We could look at quotas for Travellers in politics, or reserved seats for Travellers.” The recent appointment of Sindy Joyce, a young Traveller woman, to the Council of State, was a “really significant development and we need to see a lot more in that regard”.

Travellers need to see Traveller faces in parliament and other elected assemblies. “If that was to happen it would do a lot to deconstruct this notion that our parliament is the sole preserve of the majority population,” said Mr Collins.

‘Survival of our people’

Patrick Donagh, a Traveller doing a Phd in law in Trinity College, said: “The trust Irish Travellers have in the Irish State is almost non-existent.”

The creation of a seat in the Seanad for Travellers would “make an important difference” to Travellers’ perception of politics, he argued, adding this measure was provided for in the Constitution as had been done to reserve six seats for university candidates and alumni.

He also recommended Traveller-specific scholarships for universities, as there were fewer than 200 Travellers in third-level education.

Kathleen Sherlock of Minceirs Whidden said increasing Travellers’ participation in decision-making was not simply about culture, but about the “survival of our people”.

The community was in “deepening crisis” and “rapidly deteriorating before our eyes” in terms of its access to accommodation, low educational attainment and increasing suicide rates. In this context it seemed improving outcomes for Travellers would “continue to be an uphill battle”.

The root causes of this were successive Governments’ actions and inactions which had damaged the community. Legislation and “positive measures” would be needed to resource and support Travellers for political participation, she said.

Bernard Joyce, director of the Irish Traveller Movement, said it was “critical” that positive action was taken. There had never been Traveller political representation at national level in the history of the State and the bodies that were meant to democratically represent all people had imposed “draconian laws” on the community, causing devastation, discrimination and marginalisation.

And though many “strong Traveller activists” took part in bodies like Local Traveller Accommodation Consultative Committees – which oversee councils’ provision of Traveller accommodation – too often they were “ignored, silenced and marginalised”.

Former governor of Mountjoy prison, John Lonergan, said among the most transformative experiences for Traveller prisoners has been simple participation in prison life. In the past, he said, Traveller prisoners were more easily identifiable as Traveller. Groups of Travellers would share a cell known as “the caravan”, they would be given the dirtiest jobs and were very stigmatised by other prisoners.

Today there was less segregation and Travellers participated in creative activities and wider prison life.

“There is no doubt in my mind education is most significant. It gives confidence, knowledge about your rights,” he said.