No-deal Brexit will see checks on UK imports but not at border, says Goverment 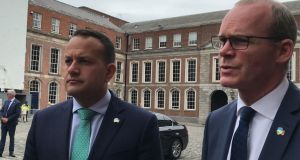 Taoiseach Leo Varadkar and Tánaiste Simon Coveney: a crash-out Brexit ‘would involve additional costs for and disruption to businesses throughout the island, particularly those in Northern Ireland.’ Photograph: PA

Some checks on products imported from the UK, including Northern Ireland, would be necessary in the event of a crash-out Brexit if Ireland wished to maintain its full participation in the EU single market and customs union, the Government has said.

In a Brexit planning document published this afternoon the Government says the checks required would disrupt trade between the UK and Ireland but says these checks would not take place at the border.

“The impact of tariffs, and of the customs and sanitary and phytosanitary requirements requirements (health checks) and associated checks necessary to preserve Ireland’s full participation in the Single Market and Customs Union, would be significant for the operation of the all island economy,” the document warns.

A crash-out Brexit “would involve additional costs for and disruption to businesses throughout the island, particularly those in Northern Ireland.”

In the plan the Government pledges to work with the European Commission to minimise the costs and disruption caused by these checks.

Elsewhere, the document warns of significant job losses, disruption to trade and economic damage to Ireland, Northern Ireland, the rest of the UK and the EU if there is a no-deal Brexit on October 31st.

“A no-deal Brexit will have profound implications for Ireland on all levels,” it says.

“These implications involve severe macroeconomic, trade and sectoral challenges both in the immediate term and in the longer term. Addressing those challenges requires difficult and significant choices of a practical, strategic and political nature,” it warns.

The document summarises the significant preparations the Government has made in recent months, and says that these preparations will intensify over the coming months.

However, it says that even with extensive preparations, there will be significant damage North and South if a no-deal Brexit occurs.

“A no-deal Brexit will be highly disruptive and will have profound political, economic and legal implications, first and foremost for the UK, including most significantly Northern Ireland, as well as having significant impacts on Ireland and the rest of the EU.

“In a no-deal scenario, it will be impossible for the UK to maintain the current seamless arrangements with the EU across the full range of sectors, from justice and security cooperation, to transport connectivity, to trade flows and supply chains.

“A no-dealBrexit,” it says, “will be an unprecedented event, bringing with it disruption and severe negative economic impacts.”

It also warns of the severe consequences, both economic and political, for Northern Ireland. Small businesses in the North, it says, will be particularly at risk.

“A no-deal Brexit poses risks for the Good Friday Agreement and raises profound political challenges and lasting societal impacts for Northern Ireland. The prospect of operating outside the EU with no-dealwould be extremely serious for businesses, large and small, and for the overall economy of Northern Ireland. It would also have potentially severe implications for North/South cooperation.”

The document also warns that the British government would unilaterally revert to direct rule of the North after a no-deal.

“If the Institutions are not in place at the time of a no deal Brexit, there is a risk that the UK Government might initiate a move to Direct Rule in Northern Ireland as a response to managing the shift to new post-Brexit arrangements in the timeframe involved,” it says.

* Delays to transit of exports and important through UK landbridge

* Closure of businesses and loss of jobs, especially in the agri-food fisheries, manufacturing and tourism sectors

* Deterioration of the public finances

* Disruption to North-South co-operation in areas such as energy, road and rail connectivity