Hundreds of people turned out to the Hill of Tara to celebrate the summer solstice a tradition that dates back thousands of years. Video: Enda O'Dowd 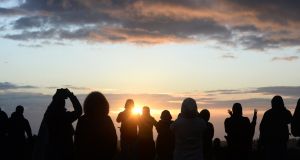 A crowd gathers on the Hill of Tara in Co Meath for the summer solstice celebrations. Photograph: Dara Mac Dónaill/The Irish Times.

At 5.20am, 23 minutes after sunrise, rays broke through clouds on the eastern horizon, bathing the Hill of Tara in a gentle orange light.

A large cheer went up and the bodhrans, drums and cymbals beat louder and faster. As it rose, the sun illuminated a rainbow to the West.

Ireland has survived worse vicissitudes than Covid-19 in the 5,000 years since the Hill of Tara was first used as the ancient seat of the High Kings. There was no indication of the strange times we live in on Sunday.

Nobody was wearing a facemask and the social distancing guidelines that have become the norm during the pandemic did not appear a major concern.

“We are here to celebrate new beginnings,” said Corina Arcus, a yoga teacher who comes to the Hill of Tara every year but was making her first visit for the summer solstice. “The rainbow is so magical. I got out of that (Covid-19) reality for a while, I forgot about it for those few hours.”

The largest crowd seen for many years gathered on the hill for the summer solstice, which occurred at 4.57am. For many of those present it represents a moment to connect with the seasons and pre-Christian Ireland, where events like the solstice were charged with much meaning.

Ange Kalibatiene came with her partner and two children, leaving Dublin at 3.30am to be there for sunrise. They brought deck chairs and lit a fire.

“We are Lithuanians and our traditions are similar. We celebrate the shortest night and the longest day. We believe in a long-lasting life,” she said.

Last year an American couple came to the hill to be married. The celebrant was Enda Donnellan, an inter-faith minister.

Donnellan conducted a Vedic (Hindu) ceremony on Sunday by burning dried cow dung on a fire and inviting those present to place some of the ashes on their forehead, like a pagan version of Ash Wednesday.

“Our sacred goddess was Bóinn,” he explained. “The ashes radiate healing across the land and bring unity and balance so people remember their reasons for being here on the planet. Prayers are made at the time of sunrise.

“We are all looking for that place inside of ourselves of strength and no better way to find strength than to put our feet on the earth and align ourselves with nature.”

Elaine Ní Chiardha, a singer from Navan, Co Meath, chanted her way through the solstice.

“We are singing a few mantras to celebrate the Earth, the sun goddess,” she said. “Maybe we need this, it’s been a challenging time for everyone, the energy of the rising sun.”