‘Association with the enemy... cannot be allowed to continue with impunity’ 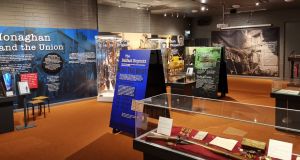 The Monaghan Museum exhibition includes a full copy of the recently rediscovered intelligence book used by the IRA to target its enemies in the War of Independence.

Documentation outlining how the IRA dealt with spies during the War of Independence have been made available to the public for the first time.

Monaghan County Museum has made public original letters and documentation collected by Thomas Brennan who was second in command of the 5th Northern Division of the IRA during the War of Independence. He was interned in Ballykinlar Internment Camp in 1921.

They include correspondence from IRA headquarters sent in April 1921 dealing with spies at a critical time in the War of Independence.

One deals with cases of “association with the enemy” whereby civilians might inadvertently be fraternising with the enemy which places them “in a position of being potential spies”.

It then goes on to advise of the consequences if people do not adhere to the warnings: “Such association cannot be allowed to continue with impunity: that it is not desired to molest or inflict punishment or inconvenience unnecessarilyupon any person; but that the danger involved is such that if this dangerous association continues, action shall have to be taken”.

It then goes on to outline the steps to be taken before convicted spies are “executed”.

“All cases of execution of spies shall be notified at once to the Adjutant General. All cases of persons killed by the British and marked by them as spies ‘executed by the IRA’ shall be speedily investigated and reported on.

“In all cases of alleged spying, in which, while the evidence obtainable is suggestive of guilt, it is considered to be inconclusive, it shall, before the arrest of the suspected person, be placed before a Court of Inquiry, and the notes of evidence together with a full report in the matter, shall be submitted without delay to the Adjutant General.”

The exhibition includes a full copy of the recently rediscovered intelligence book used by the IRA to target its enemies in the War of Independence.

Described by National Museum of Ireland curator Brenda Malone as a “find of national importance”, the album features photographs detailing those who the IRA wished to target.

It was owned by the family of Monaghan IRA commander Matt Fitzpatrick. He was shot dead in February 1922 during a gun battle which ended in the deaths of four members of the Ulster Special Constabulary (the B Specials). That incident became known as the “Clones affray”.

It is uncertain how the photographs ended up with Fitzpatrick as he does not appear to have been involved in IRA intelligence during the War of Independence.

The blue hardback album entitled News Cuttings has belonged to his nephew, Gerard Fitzpatrick from Clones who has now loaned it to the museum at Collins Barracks.

The Monaghan Museum exhibition is produced in collaboration with Professor Terence Dooley of Maynooth University and reveals a tale which is more than just a struggle between the IRA and the British forces.

The exhibition also considers the impact of the conflict on the local population, men and women, plus sectarianism due to Monaghan’s proximity with the Unionist majority counties in Ulster.

The county had one of the highest percentages of Unionists in what is now the Republic accounting for one-in-four of the population 100 years ago.

Monaghan Museum curator Liam Bradley said the county was distinguished in that the War of Independence was carrying on with a sectarian tinge with tit-for-tat killings between the B Specials and the IRA.

Also available to view is a collection of short films bringing eyewitness accounts to life, based on the Monaghan War of Independence Files - a collection of over 500 pages of first-hand accounts from IRA veterans.