Who was L’Arche founder Jean Vanier?

L’Arche, which helps people with intellectual disabilities, has four communities in Ireland 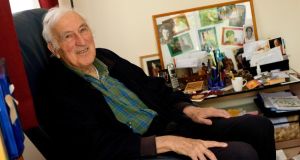 A report to be published on Tuesday has found L’Arche founder Jean Vanier was implicated in the sexual abuse of women.

Jean Vanier, who founded the L’Arche communities for adults with intellectual disabilities, died at the age of 90 last May.

The following month, L’Arche announced it had commissioned an independent inquiry, undertaken by the UK-based GCPS Consulting, “that will allow us to better understand our history”.

The report, to be published on Tuesday, found Vanier was implicated in the sexual abuse of women. The abuse, which did not involve women with intellectual disabilities, continued into the 2000s, according to the report. L’Arche did not comment on the impending report.

Vanier was born in Geneva in September 1928, a son of Georges Vanier, a Canadian soldier and diplomat, and his wife, Pauline.

As a young naval officer he served with the Royal Navy and then with the Royal Canadian Navy, accompanying the British royal family, including the future queen, then young princess Elizabeth, on their 1947 voyage to South Africa.

In 1950 he resigned his commission and began studying at L’Institut Catholique in Paris. It was around then that his parents introduced him to the Dominican priest Fr Thomas Philippe. The priest became Vanier’s teacher and mentor.

According to a L’Arche account: “Two years later (1952), Fr Thomas, for reasons undisclosed, was forbidden by Rome to carry out his pastoral ministry. Jean’s move toward the priesthood was shattered, without however destroying his filial level of respect for Fr Thomas.”

In 1964 he visited Fr Philippe in the French mental institution where the priest was then chaplain. This encounter with people suffering from intellectual and psychological difficulties led Vanier to make a commitment to them.

He bought a small, rundown house without plumbing or electricity in the village of Trosly-Breuil, north of Paris, and invited two men with learning disabilities – Raphael Simi and Philippe Seux – to share it with him. Both had been living in an asylum and were without family.

The initiative was prompted by Vanier’s visits to long-stay hospitals which housed people with learning disabilities at the time. “Huge concrete walls, 80 men living in dormitories and no work. I was struck by the screams and atmosphere of sadness,” he recalled later.

Believing the men’s need was for friendship he thought the small house could provide the support of an ordinary domestic life, with the three of them shopping, cooking and washing up together.

Today L’Arche has 149 communities, in 39 countries. The Irish communities are in Cork, Kilkenny, Dublin and Belfast.

In 1971, Vanier also founded Faith Light to help people with learning difficulties. It has more than 1,600 communities in 80 countries, including 23 on the island of Ireland.

In 2015 he was awarded the £1.1 million (€1.3 million) Templeton prize, for making “an exceptional contribution to affirming life’s spiritual dimension”.

That year there were revelations about Fr Philippe, who was found by a Catholic Church investigation to have sexually abused 14 women, many of them associated with the L’Arche community, with some incidents back to the 1970s. It is understood that no people with disabilities were abused.

Vanier wrote that he was “overwhelmed and shocked, absolutely unable to understand how this could have happened”.

He said: “A few years ago, I was told of certain acts, but until now I remained totally in the dark as to the depth of their gravity.”

He expressed compassion for the priest’s victims but also praised Fr Philippe’s role in supporting L’Arche and spoke of being “at peace, without searching to know more. . . that said, in thinking of the victims and their suffering, I want to ask forgiveness for all that I did not do or should have done.”

He also added that he needed “to affirm my own experience and gratitude to Père Thomas. In regards my own life journey he was an instrument of God.” He said: “I cannot judge Père Thomas; God alone can judge. Jesus is merciful and he forgives in his love.”

Over a year later, in October 2016, he repeated his condemnation of the priest’s actions and said: “I have mourned Père Thomas as I knew him. I ask the forgiveness of the victims for not having measured soon enough the extent of their traumatisation and for not having been sufficiently sensitive to their suffering.”

He said he had “great confidence in this priest who helped me spiritually. I realise today, with all the revelations we have received, what sort of sexual perversion was at play within him.”