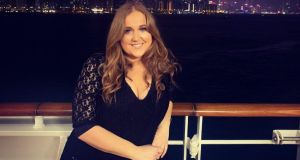 Rebecca Harkin and her partner were both musicians on the Diamond Princess cruise liner which was forced into quarantine on February 3rd after it emerged that a former passenger had tested positive for the Covid-19 virus.

An Irish singer who was among 4,000 people quarantined on a cruise ship off the Japanese coast at the start of the month because of coronavirus has expressed her gratitude to the authorities after being taken off the boat.

Rebecca Harkin and her partner were both musicians on the Diamond Princess cruise liner which was forced into quarantine on February 3rd after it emerged that a former passenger had tested positive for the Covid-19 virus.

All told 621 passengers and crew were found to have contracted the coronavirus making it the largest cluster outside China. Two passengers from Japan died in hospital after being evacuated from the ship for treatment.

In a message posted on Twitter last night the singer said she and her partner were both well and settling in to a two week spell of quarantine in Darwin, Australia.

She expressed gratitude to people for their “lovely messages and prayers these last few weeks” and added that the couple were “both healthy and safe [and]getting so well looked after in Darwin along with all the other evacuees.”

She said the team looking after them were “amazing” and “so caring friendly and understanding... I cannot thank them enough.”

She said she was looking forward to “two weeks of sunshine and unwinding after the crisis”.

Around 100 passengers who were in close contact with infected people on board the ship began disembarking from the Diamond Princess cruise ship in Yokohama on Saturday, local media said.

They included the last batch of Japanese passengers to leave the ship while some foreign passengers were still waiting on board for chartered aircraft to be sent by their governments.

Around 970 passengers disembarked earlier this week. In Australia, six people taken back to Darwin from the ship have tested positive to Covid-19. Another three people who have developed symptoms were being tested on Saturday.

There were 170 Australians on the evacuation flight and all were checked for symptoms before leaving Yokohama, where they had been kept on the ship.